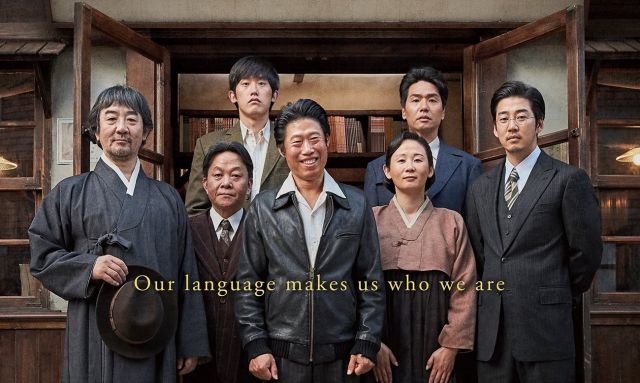 During the latter years of the Japanese Occupation the Korean language is not quite banned. Still, the Japanese who rule Korea would rather their subjects not speak it. The chief exception to this rule is for language scholars who are studying Korean academically. Or at least, that's what they want the Japanese to think. In reality Gap-yoon (played by Kim Hong-pa) is putting together a team of cunning linguists to publish and distribute a secret dictionary.

Goofy though the concept may sound, writer/director Eom Yoo-na makes a concerted and very successful effort to emphasize why the dictionary is such a big deal. She accomplishes this mainly through the use of Pan-soo (played by Yoo Hae-jin), a mostly illiterate hustler who joins the conspiracy out of nationalistic pride even though he has no idea what Gap-yoon's team is actually doing. Pan-soo proves critical, though, as the linguists are huge nerds in dire need of his street smarts.

The main guy Pan-soo bonds with is Jeong-hwan (played by Yoon Kye-sang) who provides most of the relevant exposition. Jeong-hwan sees the Korean language in terms of poetry. He waxes on about the different origins of various words, and his stories always manage to find a way to wrap back around into some form of quintessentially unique Korean identity. From foods to flowers, the Korean language is their collective cultural experience from the northeast to the southwest.

Which, incidentally, is where the title comes from. Mal-mo-e from means "gather the words" and refers to how the dictionary's concept evolves to encompass the huge variety of now mostly extinct regional dialects. The real-life dictionary on which "MAL-MO-E: The Secret Mission" is based is the only remaining proof that most of these extant words ever existed. The subtext is bittersweet to be sure.

But for as long as it lasts, "MAL-MO-E: The Secret Mission" proves a beauteous journey. Just visually, the detail that goes into the background is incredible. Every random passerby in the street, every shop window, even the streetcars have a very distinctive feel precise to the era. We can see the culture clash play out in front of us as Korean signs are slowly replaced or dwarfed by Japanese equivalents- yet all the while, these cultural signifiers never take precedence over the crowded chaotic streets where Pan-soo is always keeping a vigilant eye.

More than anything else, though, I was surprised at how brisk the pacing in this movie was. Well over two hours long, "MAL-MO-E: The Secret Mission" moves smoothly. The performances are so vibrant that, if anything, a lot of the cast (including Gap-yoon himself) feels shortchanged for screentime. I like to read this as a metaphor for the importance of quiet serious work in the background. Not everyone can be the hero and really, by the time we get to the climax, it's unclear whether anybody's going to get that role in the end. The pen is not mightier than the sword, although it's more worth dying for.