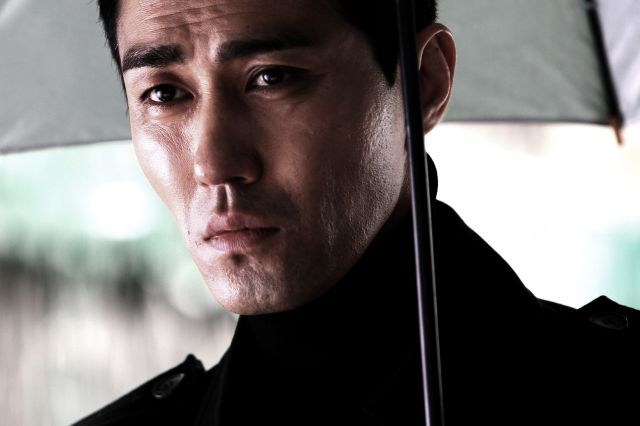 Ji-wook (played by Cha Seung-won) is a very sad police detective. He does typical violent action movie stuff, confronting large numbers of gangsters, fighting them openly in huge combative setpieces. But that's not why he's sad. Ji-wook is sad because deep down he knows that he's really a woman, and he wishes ever so much that he could do all those things that women do. Like wear women's clothes. And...uh...

All right, "Man on High Heels" doesn't purport to be a treatise on transgendered persons and their difficulties in day to day life, so I'm not going to look down on it for failing to be an accurate representation of trans issues. This is supposed to be an action comedy after all. But then it doesn't really do much better on that front. There isn't any humor in the fight scenes. They're violent, fast, destructive, and cleanly choreographed, but nothing about them is really amusing in any way. People get hurt. Most of the time they deserve it.

Then sometimes they don't and, well, I just don't know what to feel about these scenes. "Man on High Heels" kind of wants to be a silly comedy where Cha Seung-won puts on a dress, but usually it's just about the aggressively depressing events in his transgender character's life, both past and present. It's hard to laugh about Ji-wook's transgender identity when there's all this trauma attached to it. The film never escapes the low brow humor of the premise well enough to really work as a serious drama.

Take Heo-gon (played by Oh Jung-se). As a villain, his motivation is partly revenge, partly intense fascination, but either way, none of his actions in relation to Ji-wook make a whole lot of sense. He even directly admits as much during the ultimate climax, a mean spiteful setpiece that seems designed to make Ji-wook sad for no reason except, well, it's his destiny to be sad? And engage in manly fight scenes I guess.

It's not just mean to Ji-wook though- it's pretty cruel to the viewers too. I could appreciate the style of the fighting early on, but when the movie gets depressing watching people get physically hurt is just, well, a bit of a bummer really. By contrast, I felt almost nothing for the actual characters. Even Cha Seung-won's performance is pretty uninspiring. He doesn't seem to have any idea what Ji-wook is feeling, and consequently, neither did I.

Lastly, a warning for anyone who wants to view this from a transgendered angle- the ending will make you angry. Really everything about the flashback plot will probably make you angry, since it creates some pretty misleading impressions about transgender identity and how it's formed. Well, maybe. Again, I'm not an expert. And again, while "Man on High Heels" is under no obligation to be an educational movie, given the poor quality of the film in every other department, it would have been nice if I could at least say I learned something from it.