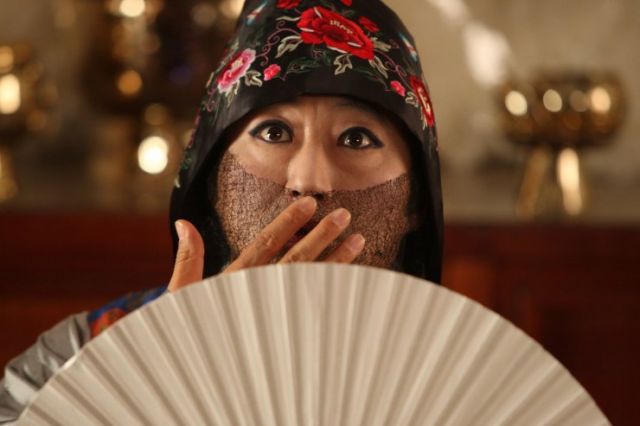 In the spotlight this week: Jo Jin-kyoo's "Man on the Edge"…

Last year "Man on the Edge" cruelly missed out on a top ten finish. Almost all the horses were in, and the 3.8M admissions its scored back in January (roughly $25.6M) meant it was looking snug and settled behind "The New World" (10th with $31.4M), but in year's final hour "The Attorney" snuck in and, eventually, finished its case with $36.9M in compensation.

"The Attorney" did not so much 'climb' into sixth; rather it impressively, and promptly, inserted itself among 2013's top performers. It was a dramatic departure for Jo's efforts, to be sure, and before last year's record books are taken by time (and 'fringe' favorites such as this forgotten), I was curious to experience how this gangster-shaman crossover managed to weave all its generic threads together. It's tight, and outlandishly original, but lacked a little punch in the end (much like its fight in the top ten) and stumbled across the line lacking and loose.

Jo Jin-kyoo was the creative force behind "My Wife Is a Gangster" (2001), an iconic gangster-comedy whose popularity birthed two sequels (as well as future hat tipping and tampering). The third installment ("My Wife is a Gangster 3") was, sadly, Jo Jin-kyoo's last feature (although he did direct an army sitcom with Choi Seong-beom back in 2011/12: "Bolder By the Day"), and so "Man on the Edge" represents somewhat of a comeback for the godfather of the ironic K-gangster.

The set-up is simple. Gwang-ho (Park Shin-yang) is an enterprising gangster who becomes spiritually endowed after a dockside brawl leaves his palm's lifeline looking Grand Canyon (catching a knife with your bare hands is so very manly, but soon he'll be puckering up his rouge lips in service to a higher power). Whatever course his life was on before, this little intra-gang injury has unequivocally altered his destiny (*I'm not familiar with palmistry so I can neither confirm nor deny the science here); opening him up to the ancient spirits, and bestowing upon him the power and potential to be one of the greatest shamans ever known.

Naturally this thug-loving suit wants nothing to do with these 'spirits' and their transcendent dribble; he's got knees to knock and deals to strong-arm. He doesn't need this supernatural stress now: his boss will soon be sleeping with the fishes (naturally, of course), and he's under pressure for position within the gang by his archenemy Tae-joo (Kim Jung-tae). Initially he resists possession, but soon enough the power of the collection consciousness he now has access to is too much.

First he gets trained by the tradition's gatekeepers (a delightful mother-daughter duo), and to start he's terrible; but soon people are queuing up to have their future told by this effeminate fortuneteller, hoping for personal prophecy from this gay gangster they can take to the bank. He sees his clients behind a veal and a hand fan, and dispenses detailed advice and notice to all those who seek to tap his insight (That is, of course, when he's not enforcing fate on others by predicting pain in their immediate futures). Meanwhile, his thug life is getting more demanding as Tae-joo plots to discredit him before their boss selects a successor. And that's when he starts to see the undead (particularly one needy and persistent yellow 'chicklet'). This pressure from all sides (and dimensions) forces our diamond in the rough to do some serious soul searching, and bleed a little bit along the way too.

"Man on the Edge" (aka "The Gangster Shaman") is a light laugh with plenty of action and awkwardness. Fans of Korea's gangster genre should approve, and K-comedy lovers will find the set-ups and silliness well worth the stitches. Like many Korean comedies, however, "Man on the Edge" does drift into the melodramatic and teary, and as such our hero's journey here is heavier than one might expect (it reminded me of Kim Yeong-tak's 2010 winner "Hello Ghost" in this way, but not quite as focused nor emotively impactful). It's numbingly predictable, contains all the usual suspects of K-comedy, and perhaps didn't dig deep enough with a few of its relationships. Still, the film is a proud pastiche that puts a relatively fresh spin on Jo's dedication to gangsters and giggles.