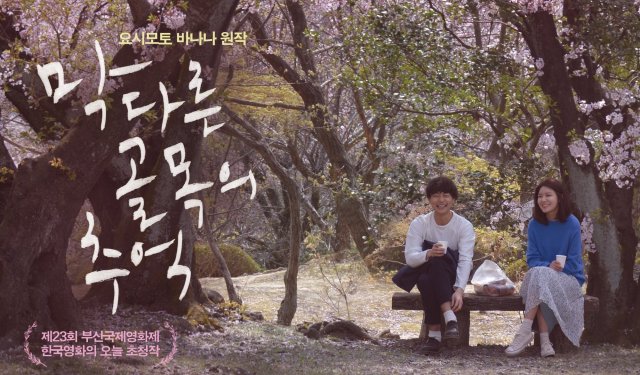 The backstory of "Memories of a Dead End" reads like a typical romance. Korean girl Yoo-mi (played by Choi Soo-young) goes to school in Japan, meets the man of her dreams, and they promise to get married when she comes back. But alas, a fairy tale ending is not forthcoming. Once Yoo-mi's dreams are shattered, she's left wandering Nagoya by herself, wondering what to do with a life that no longer has a plan, until finally settling in at a guest house appropriately named End Point.

Now, you might be expecting "Memories of a Dead End" to be transitioning into being a romance about a new love in Yoo-mi's life. That's not too far off the mark actually. Nishiyama (played by Tanaka Shunsuke) works at the guest house where Yoo-mi is staying. The guy is super nice and super cute, and slowly encourages Yoo-mi to stop wallowing in self-pity and just enjoy her long trip to Nagoya for what it is- a breather of a vacation.

The twist is, End Point is itself closing down. This at first seems counterintuitive. The guest house cafe appears to have plenty of regular customers, and the semi-elegant nightly parties are cheery enough. But hey, sometimes a good thing just doesn't work out. That's the main narrative thrust behind "Memories of a Dead End". The movie is about Yoo-mi coming to terms with the fact that life didn't work out the way she planned, and that's OK.

The movie meanders a lot, and is more about trying to find joy in the simple act of meaningless existence than trying to do so through specific life experiences. While Nagoya looks beautiful, no real landmarks are presented. We're just left with wandering ecology, and faint outlines of vague happy memories as Yoo-mi starts to appreciate that, hey, it's spring! And she's on vacation! Also, people are really nice!

"Memories of a Dead End" is less an advertisement for Nagoya specifically as it is an endorsement of traveling as an abstract concept. Yoo-mi finds familiarity and comfort in the unknown. Which shouldn't be much of a surprise given that she's a Korean girl who decided to go to school in Japan. "Memories of a Dead End" is well done for what it is, a short simple story about emotional healing. But even at ninety minutes the movie feels awfully long, and it's easy to see how it's based on a Japanese short story.

That's why, for all these strengths, it's surprisingly difficult to recommend "Memories of a Dead End" as a film. The concept is such that the narrative only really has strong appeal for a specific subset of people- those who can identify with what Yoo-mi and Nishiyama are going through, having been blocked off by emotional dead ends of their own in the game of life. Still, good breakup movies are hard to come by. At best it's usually just the act of watching a breakup movie with a friend that cheers a sullen person up- an element which "Memories of a Dead End" itself understands all too well.

"[HanCinema's Film Review] "Memories of a Dead End""
by HanCinema is licensed under a Creative Commons Attribution-Share Alike 3.0 Unported License.