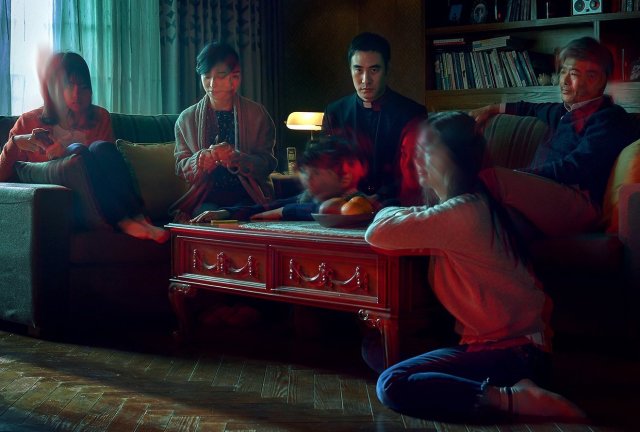 Joong-soo (played by Bae Sung-woo) is a Catholic priest and exorcist. In the cold open to "Metamorphosis" we see an exorcism gone horribly wrong, less because of anything Joong-soo himself did incorrectly, and more because the demonic spirit managed to successfully imitate the person it was possessing at a critical moment. Further events create the disturbing impression that the demonic spirit's actual goal was just to get into Joong-soo's head, although cryptic warnings about a horrible fate to befall Joong-soo's family are, well, the actual plot of the movie.

The sheer tension in "Metamorphosis" is absolutely superb. Before we get any clear hint as to shapeshifting shenanigans there's this great scene where Joong-soo's brother Kang-goo (played by Sung Dong-il) is just exploring an eminently disturbing house in a predictably futile effort to ask the owner to, maybe, stop killing small animals and hanging them out to die outside. The imagery is disturbing yet distinctly the work of a mortal hand, which makes it all the creepier.

When the whole transformation aspect of the plot does come into play, we get to see the very unnerved family slowly coming to grips with the fact that it's not any one person who's strange. Someone or something just transforms into a distorted, violent, socially unaware version of a family member. One particularly disturbing plot twist suggests that that part of the reason why the demon can't normally successfully replicate a human's responses is because the only humans they have regular contact with are exorcists.

Terrifying as the base story may be for Kang-soo, his wife, and children, "Metamorphosis" also makes the smart decision to portray the spirit as a fairly mundane problem which exorcists deal with the same way a plumber might deal with a clogged pipe. One amusing moment of comic relief involves senior exorcists arguing over whether they're dealing with a regular demon or Satan itself. The stilted English in that scene may or may not have been intentional, but it works.

The main criticism that can be levied against "Metamorphosis" is that the movie is not particularly original. The movie is not on a fundamental level that different from "The Priests" and either ripped off or was inspired by that film, depending on how sympathetically you want to view the practice of cultural appropriation. I imagine that to someone with a better understanding of current American exorcist films than myself, the movie may come of as even more derivative.

But "Metamorphosis" is not a movie that inspires particularly picky viewing habits. Director Kim Hong-seon promises us a horrifying glimpse into the unknown, where monstrous spectres inhabit the shell of our loved ones and try to convince us we're crazy. The sheer mortality of the characters and the way this inspires performances is a huge strong point, Kang-goo and his family are just a bunch of normal people who can't do much more than trust the family priest. And Joong-soo, too, is all too limited, and filled with self-doubt. His sacrifices are of resignation, not heroism.