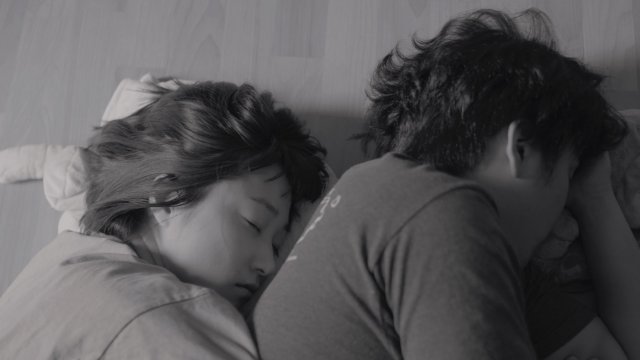 Hyeon-sil (played by Kim Ye-eun) is a lazy woman in her late twenties. She has an excited, energetic dog but doesn't like walking him in the morning. In the very weird scene that follows we see Hyeon-sil be clumsily hit on by a young jogger who clearly doesn't know how to talk to women. But does Hyeon-sil herself have any idea how to talk to anyone? That is the central mystery behind "Midsummer Madness" which is more literally translated as Midsummer Thinking.

This is very appropriate, as Hyeon-sil is an overthinker. It quickly becomes quite intuitive how Hyeon-sil is a poet, in part because she is desperate to refine her complete inability to communicate into something that might make sense to someone, somewhere. "Midsummer Madness" bookends itself with simple spoken readings of Hyeon-sil's poetry, each of which seems to get at some more sublime truth about her interpersonal relationships.

The key words there are seems to, as I found myself ultimately skeptical of whether Hyeon-sil has, well, any particularly noteworthy aspects of herself at all. The early jogger scene seems kind of brilliant in retrospect, because the idea of any young cute guy, however socially incompetent, trying to come on to Hyeon-sil just seems utterly bizarre. While Kim Ye-eun is deliberately plain in the lead role, wearing little makeup, this is more self-image than anything else. Hyeon-sil focuses on communication to the detriment of all else, despite not being very good at it.

This gives a very sad quality to her reminisces about past relationships. A stuffed Squirtle doll becomes the closest thing "Midsummer Madness" has to a plot device, as it illustrates how Hyeon-sil has always been operating on a completely different wavelength than her ex-boyfriend. To him, the action of acquiring the dolls was the important part of the process. Whereas for Hyeon-sil herself, interpretation of the dolls is what matters, in spite of the fact that there isn't actually anything to interpret.

You can perhaps see how after a point this gets to be a bit unsatisfying, a lead character who insists on trying to interpret the uninterpretable. This almost takes on absurd dimensions as subsequent conversations with new characters increasingly reference and overpontificate on previous conversations. This even as these previous conversations were irrelevant or subject to arbitrary context that's left ambiguous to us as viewers. At least one of these conversations was entirely imaginary, just to make all this further convoluted.

But I use the phrase almost takes on absurd dimensions for good reason. Most of the weird structure of "Midsummer Madness" wasn't that obvious while I was actually watching the movie. It's only now that I'm reconstructing the plot for the sake of writing this review that I've come to appreciate the farcicality of the deliberately unsatisfying design. I'm not sure this kind of faux cleverness necessarily makes "Midsummer Madness" a good movie, although there's a good chance you'll get more out of it than I did just because you have a better idea of what to pay attention to.