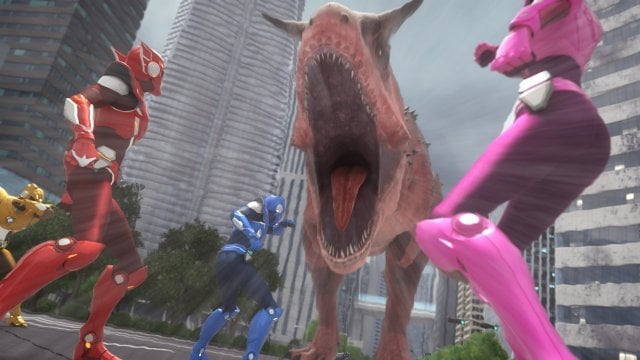 Little time is wasted in "Miniforce: Deeno the King of Dinosaurs" as director Lee Yeong-joon just skips right past any relevant exposition and just dumps us right into the exact situation promised by the movie's theatrical poster. Dinosaurs are coming out of interdimensional portals, attacking the world, and the Miniforce steps in to stop them. After a reasonably epic, if occasionally goofy battle, the Miniforce subdues the titular dinosaur king Deeno (voiced by Um Sang-hyun), but the antagonists fumble the escape.

At this point "Miniforce: Deeno the King of Dinosaurs" effectively transitions to a completely different movie, as Deeno is separated from his apparently evil allies and their long term plan to attack Earth and just befriends some dinosaur-loving kid. It's extremely silly and cheesy- yet oddly touching, as Deeno is simultaneously shown off as being very scary yet also quite cool, and oddly enough not even all that dangerous. He's just a misunderstood dinosaur that is for some reason the vanguard of an Earth invasion force.

In stark contrast to the aggressively episodic format of the first Miniforce movie, "The Strong and Mini Special Forces: The Attack of a New Villain", "Miniforce: Deeno the King of Dinosaurs" is surprisingly committed to just centering its entire emotional arc around a kid and a dinosaur. The Miniforce disappears for such long stretches it's easy to forget they're present in the movie at all. They're mainly just a means of slowing the dinosaurs down until the mystery behind Deeno is unraveled.

I should note that the great Deeno mystery is not really all that complicated, and only barely worth avoiding spoiling. But the actual plot isn't really the point of this movie at all. The high point is the surprisingly detailed and mostly realistic dinosaur models. The animators went to the trouble of giving Deeno and most of the other dinosaurs a magnificent scale design that really makes them feel vibrant and alive.

These strong elements coalesce excellently, to the point I found myself genuinely enjoying "Miniforce: Deeno the King of Dinosaurs" in spite of the movie's obvious tilt toward younger audiences. The story is quite accessible, and even understated at times. I particularly liked how Deeno rarely ever talks. The imposing dinosaur is so well-animated he never really needs to. We learn about him at about the same clip as everyone else. He's a terrifying creature who can only express himself non-verbally, and that's not the same as being evil.