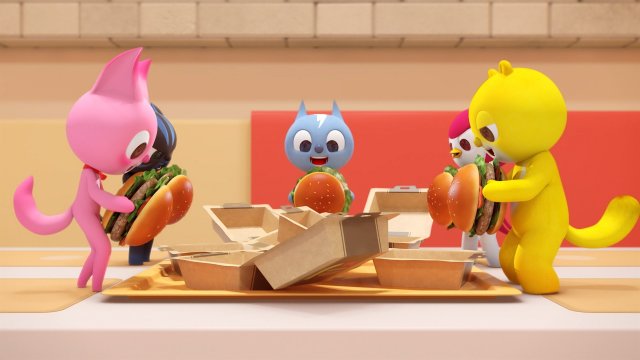 For the most part, "Miniforce: Hamburger Monster's Attack" is a fairly typical Miniforce movie. You've got the various cute little mascot characters, and then the parts where they transform into these Super Sentai-esque warriors with transforming robots. There does seem to be a new element of the robots being used as riding dinosaurs for the fight scenes. I'm assuming this was explained in the television show at some point, what with "Miniforce: Hamburger Monster's Attack" being based on a children's cartoon.

There is also decidedly less emphasis on the individual abilities of the five lead characters. One is good at science and one is good at farting. It was really weird when, later in the movie, three of them are transformed into person sized french fries and without the clashing color schemes it was a lot harder to tell them apart. I could still tell which one was the girl because, you know, being a girl counts as a distinguishing personality trait.

Oh right, the person sized french fries. The main plot of "Miniforce: Hamburger Monster's Attack" is a sinister plan to remake the world in the image of hamburgers. Somewhat counterunitively, the extended opening is quite literally about how amazing and delicious hamburgers are. I would have thought this was product placement, except that Mister J's Hamburgers is not a real hamburger brand. Also Mister J is secretly Seeker J, a sinister figure intending to take over the Blue City food market.

The capitalist critique in "Miniforce: Hamburger Monster's Attack" is intriguing albeit exceptionally bizarre. The especially funny part is that Mister J doesn't even seem to care that much about money. He just likes telling people what to do. Even bearing in mind that Mister J is supposed to be a one-dimensional cartoon villain I found it very funny that upon having apparently succeeded in his generally outrageous goal he proceeds to start using substandard materials to drastically lower the quality of his hamburgers while also relying on slave labor from semi-sentient french fries to further cut costs. A true capitalist!

Even the semi-sentient nature of Mister J's weird minions proves a surprisingly critical plot point. The titular Hamburger Monster actually believes in Seeker J's utterly ridiculous stated motives, inevitably turning against his master upon learning that Seeker J does not in fact wish to remake the world in the image of hamburgers. There's a fascist allegory in there somewhere, although I have perhaps already spent way too much effort applying Marxist critique to the plot of a mass-produced children's cartoon.

The shorter much less interesting review of "Miniforce: Hamburger Monster's Attack" is that Bolt (voiced by Um Sang-hyun) ends up on the outs with rest of his comrades in the Miniforce because he's spending too much time doing advertising work for Mister J. Which is of course deliberate, with Mister J using the promise of fame and fortune to weaken the only real counterforce to his plot for worldwide market domination...oh, whoops. There it is. The fascist allegory.