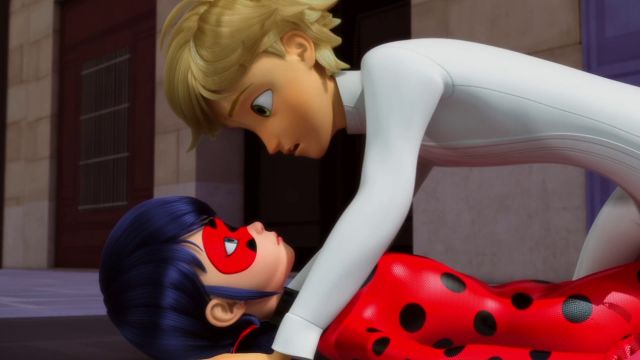 Marinette (voiced by Yeo Min-jeong-I) has discovered a mysterious old book that appears to catalog previous incarnations of Ladybug, Cat Noir, and other superpowered personas created through the use of magical sprites. As the current master of the Ladybug sprite, Marinette finds this history to be of considerable interest. So she seeks out an old acquaintance who can provide more context explaining what the backstory behind these magical sprites is.

It turns out that the book's current (although obviously not original) owner is Gabriel (voiced by Hong Si-ho), also the villainous Hawk Moth, and master of another sprite. gabriel is also the father of Adrien (voiced by Nam Doh-hyeong) who is also Cat Noir, master of yet another sprite, who fights Hawk Moth alongside Ladybug. Unfortunately right when I was getting pumped for all these characters to run up against each other in an explosive climax, "Miraculous 2: The Secret of Miracle Stone" reminded me that it's just a theatrical edit of three television episodes, not an independent product, so status quo remains supreme.

At least the way Hawk Moth manages to force an end to the crisis is clever. I like the writing in this particular children's superhero cartoon, because no one ever solves problems by just punching harder or something. Ladybug and Cat Noir have to come up with a specific strategy to disable whatever the current villain's weapon is, and the strategy always requires a fair amount of lateral thinking. Ladybug has a special power to summon something useful, but the object's utility to the present situation is never obvious. Ladybug needs a minute to scope out her surroundings to figure out the next step.

Even the set-ups are consistently fairly strong, because we're always left guessing, all right, who's going to get infected by the evil butterfly this time, and why. There's a whole sequence where Hawk Moth gets perpetually frustrated because a character keeps refusing to melt down enough emotionally to become susceptible to the evil butterfly's power. So what, evil power only takes us over if we let it?

Yeah, that works, I guess. Except in the context of when the villain's power is to just take over someone's mind directly, obviously. I'm assuming this is why Hawk Moth fights Ladybug and Cat Noir indirectly through evil butterflies instead of just trying to attack them directly. There's much less risk that way, and besides, this is a children's television cartoon. By design the story is supposed to be able to continue on indefinately.

So no, there's not much relevant continuity here, since everything is done according to formula. Ladybug and Cat Noir accidentally stir up conflict with the villain/victim, fight the villain/victim, then make up with them. The only noteworthy change even between the original "Miraculous" and "Miraculous 2: The Secret of Miracle Stone" is that there's more shipping fodder between Marinette and Adrien. Also the backstory in the first episode was pretty interesting, so "Miraculous 2: The Secret of Miracle Stone" does manage to be a decent, if still formulaic, improvement on the original film.

"Miraculous 2: The Secret of Miracle Stone" is directed by Thomas Astruc and voiced by Yeo Min-jeong-I, Nam Doh-hyeong, Hong Si-ho, and Jeon Hae-ri.