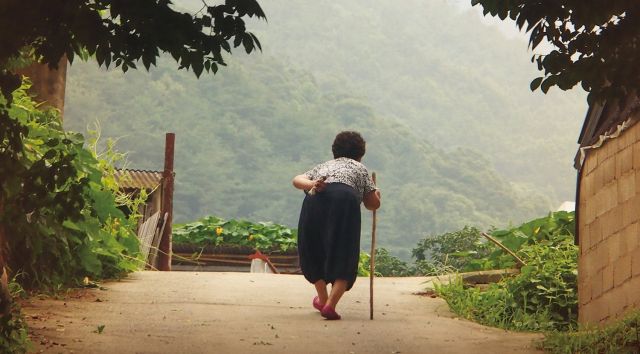 In the modern era probably the biggest impediment to real change is that people are scared of looking ridiculous. Seriously, what was the main criticism lobbed at the Occupy Movement a few years back? That they were protesting imaginary grievances? No, everyone knows the employment market (still) sucks. It was that they were dumb smelly hippies. The men and women in "Miryang Arirang" are immune to such insults. They are old. All their life they've just wanted to farm in peace and then the dumb smelly government shows up and says like it or not, now they have to live next to a dumb smelly power plant.

"Miryang Arirang" isn't even the first movie director Park Bae-il has made about this specific protest. That's something else you have to hand to the old people- no matter how much progress is made with the power plant, they simply will not give up and go home. They will be obnoxious, and loud, and outrageous, and damage property and stand in the way and force the police to remove them physically, because why not? What's the point of living to be old if you're just going to let people push you around?

It's the basic irony of the protest that makes "Miryang Arirang" on so many levels so darkly comic. The government justifies this kind of forcible development on the grounds that it will help future generations. You'd think old people would care about that but really, the men and women in "Miryang Arirang" are probably more aware than anyone that South Korea's development has always been a mixed bag. They have livelihoods today precisely because they did not move to the cities for "opportunity" when they were younger.

It's a stark contrast to young people these days, always kowtowing in front of the benevolent job creators and not wanting to make much of a mess. And for what? The hope of one day getting to be a cog in the system? On a superficial level the men and women in "Miryang Arirang" just act like cranky old jerks but anyone who's ever had to deal with a maddeningly unresponsive bureauocracy will probably find much to admire about people who can say they despise the system while actually doing something about it.

What also makes the portrayal so fascinating is the protestors manage to simultaneously be both liberal and conservative. Their protest style recalls the imagery of social justice movements and yet their goal is no overarching campaign to save humanity or any such nonsense. They just want to live in their homes and do their job without having to suffer from pollution. Is that too much to ask?

Apparently. That's the big problem with bureaucracy. Once they've decided they've made the right decision, they won't let themselves be "terrorized" into changing their minds, no matter how bad the cost overruns get because of explicit native hostility. It figures, too, that the government soaks up the costs of suppressing their own people while some corporation gets the profit. But, hey, you know, those old people are probably totally dumb and smelly. So they must be the wrong ones.