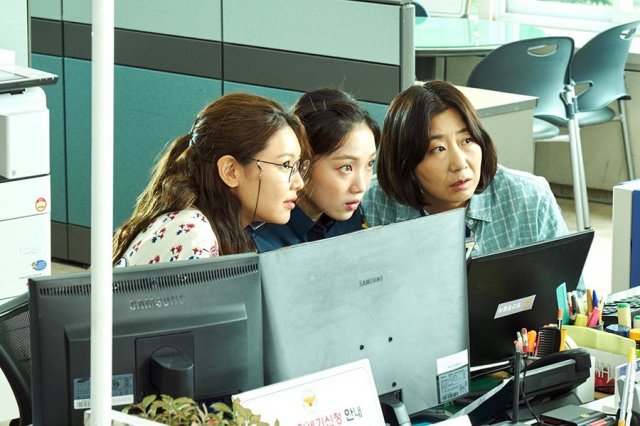 The opener to "Miss and Mrs. Cops" is filmed like a grainy old kung fu movie. The action befits the cinematographic style. Mi-yeong (played by Ra Mi-ran) is right away shown to be a tough middle-aged broad who wants to bring in crooks peacefully, but will use violence when she gets suitably cranky. By the time we get to the present day, and the more traditionally pretty woman cop Ji-hye (played by Lee Sung-kyung), there's an obvious personality clash between old and new.

...Well, that's what I thought was going to happen anyway. Mi-yeong and Ji-hye actually have mostly the same personality, it's just their exteriors that are different. I was frustrated that writer/director Jung Da-won gets such an obvious dynamic of buddy cop movies wrong, given that on paper Ra Mi-ran and Lee Sung-kyung are perfectly cast. One's a chronic background character, one's a romantic lead, they're both funny, and in this movie, they fight crime.

And that crime happens to be the distribution of of secretly filmed sexual videotapes. The monstrous nature of the crime, as well as the grisly scene that provokes the titular detectives to get to work on finding the perpetrators, is at odds with the movie's general tone of slapstick, especially since writer/director Jung Da-won keeps changing it without warning. One minute there are rapey overtones as a female character groggily comes to, the next everyone is muddling about clumsily trying to escape a fire.

Trying to avoid being burned to death probably doesn't sound like a wacky comedy scene, yet that's exactly how the hot moment plays out. It's about as funny as it sounds. Other prime moments of alleged comedy include- riding to the rescue in an automated scooter. Hawaiian shirts. Office banter. Gratuitous violence. Dropping a bunch of cameras. Mi-yeong's cute son being kind of annoying. Mi-kyeong's cute husband Ji-cheol (played by Yoon Sang-hyun) being kind of an idiot. Those wacky foreigners.

Actually I liked the wacky foreigners. They behave believably and comically in the face of two strange Korean women speaking broken English and generally behaving incompetently. A shame that those scenes are tinged with a fairly awful racist subtext, namely the implication that foreigners supply all the roofies to Korean rapists. In between the racism and the police brutality any social message about crimes against women not being taken seriously is fairly firmly negated.

Even the action in this action comedy is decidedly subpar. Many action scenes aren't filmed at all, whether it be via editing or just turning out the lights. Mi-yeong takes out whole gangs by herself but has way too much trouble with the villain, a man who we are given no reason to believe has any fighting ability whatsoever. The way the climax rips off "Veteran" is particularly galling- there's not even a hint of twist or parody. Although really, "Miss and Mrs. Cops" as a whole just plays off as a bad version of "Midnight Runners", right down to Sung Dong-il popping up out of nowhere to make excuses for police incompetence.