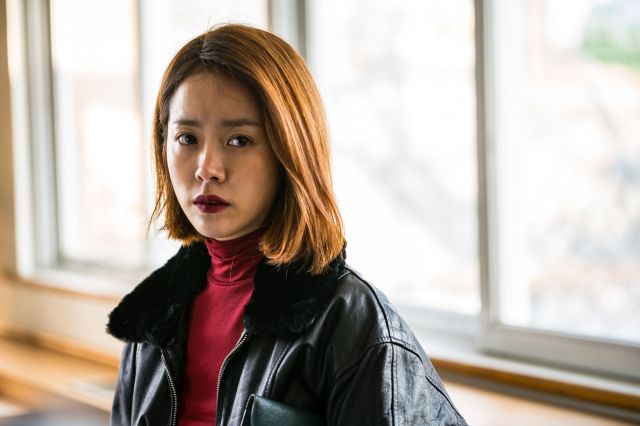 Sang-ah (played by Han Ji-min) is a cynical woman who focuses on survival, rather than thinking about a long-term future. Sang-ah's mean and bitter outlook is largely justified by the brutal and impoverished environment she lives in. Sang-ah's boyfriend, cop Jang-seop (played by Lee Hee-joon) is constantly witness to the senseless brutality committed by people who live on the margins. And Ji-eun (played by Kim Si-ah) is an elementary age student who is a living victim to that brutality.

There's an uncomfortable edge to "Miss Baek" that's grounded in indifference. The chief villains, Ji-eun's father Il-gon (played by Baek Soo-jang) and his girlfriend Mi-kyeong (played by Kwon So-hyun-I) aren't really aggresively abusive. That's an odd way to put it, considering the frequent emphasis placed on Ji-eun's horrible body injuries. But Il-gon and especially Mi-kyeong are entirely reactive. They only mutilate Ji-eun in response to the girl's perceived insults.

There are no insults, of course. Ji-eun is just a cold, hungry, frightened little girl. Her guardians are offended by any reminder of Ji-eun's existence. They're socipaths, and not even very smart ones. That's what makes the real-life inspired events of the film so frightening. While we watch Jang-seop casually interacting with the aftermath of crime, we see Ji-eun 's treatment as the inevitable prelude to something horribly and tragically preventable.

In reality, we clearly see how even at the end, Sang-ah can't shake her old tricks. But then, that's her character journey. Sang-ah looks at Ji-eun, and is reminded of the little girl she used to be. More than anything else, though, Sang-ah thinks about how assertiveness has become her survival mechanism- and how a small child like Ji-eun can't take advantage of that, and how fundamentally unfair that is.

"Miss Baek" is further elevated by powerful performances. All the characters just feel so...busy. Like they have so much to juggle in their lives, and have to make difficult choices about how to survive themselves while maintaining some standard of moral values. Even Il-gon and Mi-kyeong do this- very poorly. He's a grown man and father who is helplessly addicted to computer games. She's a dog-loving woman who uses church as an opiate and child abuse as a chaser.

Both have a disturbing preference for brand name products while the girl they're supposed to be taking care of shivers to sleep in a bathroom. Together they're scarier than any movie monster. It's all too easy to visualize their apathy in the real world, and that prospect is terrifying. "Miss Baek" is a truly excellent film that's well worth seeking out.