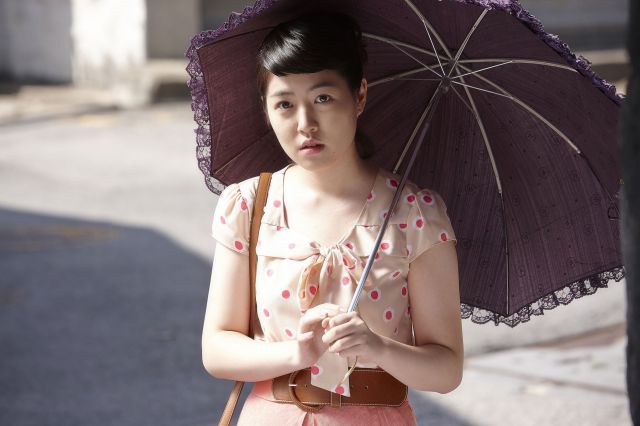 What really sells "Miss Granny" is the sincerity of its dual performances. Nah Moon-Hee and Sim Eun-kyeong both play Mal-soon, a crabby old woman who randomly lucks into the gift of a twenty-year old body. Even though the main explicit character trait of Mal-soon is that she has a smart mouth and doesn't care what other people say about her, Nah Moon-hee does not play an unconditionally bitter, mean old woman. She has doubts and regrets- and is coming off a fairly complicated emotional state when the movie's actual plot starts up.

And as far as the younger self goes, Sim Eun-kyeong does excellent work replicating Nah Moon-hee's aloof yet upfront attitude. One thing I loved about her in the immediate sense is the woman's sense of style and body language. Mal-soon has an unabashed love of Audrey Hepburn- I mean, duh, she's old and that's who was glamorous back when Mal-soon was an actual twenty-year-old. So when the time comes for Mal-soon to get fashionable, that's the style she apes.

Now, obviously, the transition isn't a perfect one, given that most clothing stores don't carry fashion from several decades ago. But the close approximation we come up with is a striking one. Not only does Sim Eun-kyeong sell the sheer glee of being an older woman finally able to wear those beautiful clothes she always wanted, the costume department clearly knew what they were doing in trying to blend vintage style with modern raw materials.

The music similarly exists on a strong note, marking a bridge between old and modern. "Miss Granny" sets the stage for this excellently by giving us good examples on what kind of music we're not going to create. Good laughs are to be had from the movie's fake bands and singers, who have very specific and absurd ideas about how to succeed in the modern competitive music marketplace. It's quite believable that Mal-soon, as an old person in a young body, is the only one who really gets how this fusion is supposed to work.

The comedy throughout is of good quality. While the scale is obviously tilted toward person in young body does things only old people are supposed to do, Sim Eun-kyeong does an excellent job delivering on this humor by just getting so into character. For the most part Mal-soon only gets confused on this stuff when she's really excited and living too much in the moment. This synchs up really well with the energetic performance we get from Sim Eun-kyeong. And it's thanks to the extended time we get to spend with Nah Moon-hee as the actual old woman that the viewer is well primed for her sense of vivacity.

"Miss Granny" still has plenty of weaknesses. A romantic storyline pretty much goes nowhere while the final act and ending move on a fairly predictable trajectory. But none of this really detracts from how effective the movie is in the moment. "Miss Granny" bills itself as the hypothetical of what an old person would do granted the amazing gift of their youthful body. In everything a person could reasonably expect from a comedy along these lines, the movie acquits itself quite well.