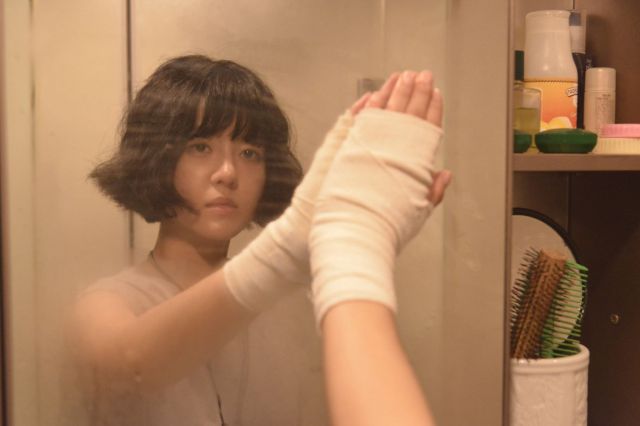 Any given scene in "Mizo" will end in one of three ways. Either there will be an extremely uncomfortable sex act, a grotesque display of violence, or lots of cussing. It's important I make this much clear right away- these basic elements make up the entirity of the film. When one ends another will inevitably start up again within the next few minutes. To even have a chance of enjoying "Mizo"  you must first have a very high tolerance for these three factors.

Unfortunately, "Mizo" is a very a short movie. With a runtime of eighty minutes, it only has so much time to show us repugnant sex acts and physical dismemberment. These were evidently director Nam Ki-woong's main priority in creating the film, so I can't exactly fault him for intent there. But let's assume for a moment that you can tolerate this basically repugnant environment. What's there to get out of "Mizo" from a storyline perspective?

Not much really. The title character (played by Lee Hyo) has gone completely insane from the abuse she's suffered through life. She ends up meeting Woo-sang (played by Yoon Dong-hwan), who is comparably crazy, though he tends to be on the giving end of pain. Together they fight...something. I guess crime? Except the fact of everyone in this movie being a criminal is rather incidental. These characters all live in a dark evil universe where dark evil stuff happens so who cares if Woo-sang gets suddenly stabbed in the gut then starts slowly breaking bones one at a time to maximize the unholy agony over that guy he just met a few minutes ago.

The sheer casual nature of the violence in "Mizo" quickly gets to be desensitizing. As in after awhile I had a lot of trouble caring. What few plot twists the movie has don't exactly come off as a surprise considering that, again, every scene ends in exactly one of three ways. A woman gets her panties violently torn off and then gets...? Yeah, I really didn't need to see that thanks.

The events of the movie are in an awkward place descriptively. If I go into a whole lot of detail, not only am I spoiling the film, I am probably triggering trauma in whoever is reading this review that's been unfortunate enough to experience any of this stuff in real life. "Mizo" is horribly unpleasant, but it's also so blunt that it's difficult to see what the point is even supposed to be. By and large the plotline reads like a rejected Kim Ki-duk idea, except the imagery's too vague to evoke anything specific. The outrageously violent climax feels more like a perfunctory obligation than the culmination of any kind of meaningful statement.

I guess a person who really enjoys vicious violence, unpleasant sex, and angry dialogue might find something enjoyable in this film. I'm sure such people are out there, but mark my words- there's no convincing depth you can use to pretend there's some kind of deep, impressive moral message at work here. The main compliment I can give to director Nam Ki-woong is that he knows his audience. Unfortunately this film is unlikely to appeal to anyone else, including me.