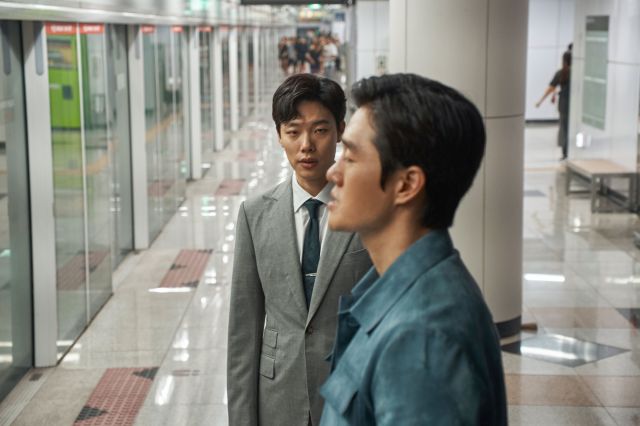 Il-hyeon (played by Ryu Jun-yeol) is a numbers nerd who already looks the part. Through voiceover and montage, we then see Il-hyeon's dorkiness even more thoroughly- he's an ambitious junior stockbroker who wants to make lots of money because he thinks bigger numbers are better than smaller numbers. Il-hyeon then predictably gets suckered into an obvious scam where in the short-term anyway his numbers do awesome.

"Money" is at its best when its this offbeat look at Il-hyeon as unlikely protagonist. He's surrounded by more obviously attractive charismatic heroes. Yoo Ji-tae plays the nameless con artist. Ji-cheol (played by Jo Woo-jin) is the cop hunting him down. Woo-seong (played by Kim Jae-young) is the hot shot at Il-hyeon's office who can tell something is up with Il-hyeon's sudden burst of confidence. Even Si-eun (played by Won Jin-ah) is fairly distinctive as the token woman working in a man's world.

With all these characters to choose from writer/director Park Noo-ri instead focuses on Il-hyeon and his dubious competence. Indeed, Il-hyeon's unearned bravado quickly becomes his main distinguishing feature. There are moments where Il-hyeon is so desperate to believe that he really is special, that he actully deserves his outrageous success, that I almost felt sorry for him. The ambivalence is pretty key to making the character work because really, you can only feel so sorry for an outrageously rich person.

Where "Money" falters is that by the time we hit the climax, writer/director Park Noo-ri has decided that Il-hyeon really was a sympathetic heroic figure all along. While Il-hyeon is from the beginning a very interesting person to watch, a critical part of what makes him intriguing is that the young man simply isn't all that likable. His motivations are explicitly selfish. Il-hyeon is a supporting character in another movie whose role has been completely blown out of proportion. He's just too narcissistic to realize it because "Money" is, after all, his story.

"Money" also suffers from being poorly edited and at two hours far too long. The scam is obviously telegraphed from the moment Il-hyeon becomes involved and there's really only so far the concept can go. Huge stretches of the film are just plain unnecessary. Il-hyeon's main charm is that he's just not a very complicated guy, so overexplaining his mental state is self-defeating. An extended special appearance by Daniel Henney is completely pointless. His presence merely sets up a late turnabout that could also have just been skipped.

The other characters have just about the perfect amount of exposition. Ryu Jun-yeol plays off excellently with all of his co-stars, such that we can easily see why it is that his obviously suspicious behavior is not just tolerated, but even celebrated. Il-hyeon is desperate for validation. This essentially pathetic quality of the character is best demonstrated through social settings. "Money" falters anytime it tries to make sense of Il-hyeon outside of that specific context. He's a character study in how people can be talked into obviously bad ideas, not how they can solve their way out of them.