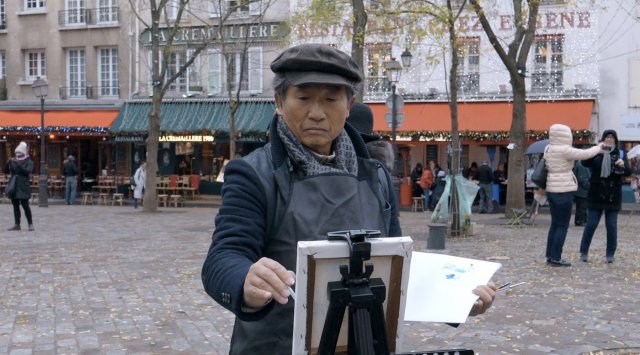 Hyeong-sik is a retired middle school teacher. He wasn't always like that. Originally the man was just a middle school art teacher, and after a lifetime of work, retirement brings the obvious question- now what? Hyeong-sik goes to conventions with his wife Woon-sook. Also they go on hikes together. We see Hyeong-sik occupy himself with teaching volunteer art classes to monks. Where "Montmartre de Papa" gets rolling is when Hyeong-sik gets an artist visa and heads for France.

For all its pretensions regarding Hyeong-sik and his drawings "Montmartre de Papa" is for the most part a fairly humble travelogue of an older Korean couple deciding to go on a fairly ambitious vacation. They want to go off and see pretty things mainly so Hyeong-sik can draw them, although this is as often as not just an excuse. The entire trip to Monaco, for example, is an obviously thinly contrived justification for Hyeong-sik to go to the casino, which Woon-sook considers a waste of time.

The most cheerful part of the documentary is the relationship between Hyeong-sik and Woon-sook. We constantly see them bicker over generally petty issues, both at home and abroad. There are moments where Woon-sook is basically designated as a villain, due to her nagging critical skepticism. This is impressively communicated in such a way as to appear charming and cute, effectively rendering the woman from the perspective of the man who loves her as his wife.

Other authentic moments include the portrayal of France in general, as being neither an especially romantic nor an especially delapidated location. One particularly cute animated reenactment depicts a subway mugging- a common concern in Paris, but one that catches the elderly Korean retired couple off guard. While Hyeong-sik travels to more stereotypically pretty landmarks like the Eiffel Tower, we also see him hawk his art at a common street market with moderate street traffic and steaming hot wine.

Paradoxically the uglier parts of France provide the opportunities for some of the more beautiful artwork. I liked the half-destroyed pier appearing as an isolated island in the face of strong beach winds. At one point Hyeong-sik even draws portraits on the wall of a building the entourage is passing through. Anyone who has traveled is familiar with these wall scribbles. They serve as a mosaic, reminding of the countless wayfarers who have passed through the area.

There really isn't much to recommend the journey of Hyeong-sik and Woon-sook through France compared to any other traveler. Really, the main remarkable part of their story is that their son, Min Byeong-woo, is a movie director. That's the only reason "Montmartre de Papa" exists in the first place. Yet the mundane nature of the documentary is its main source of charm. The France we see is authentic in a way that most depictions aren't. Much like Woon-sook, "Montmartre de Papa" tempers expectations such that even minor moments of subtle joy feel like great victories in the game of life.