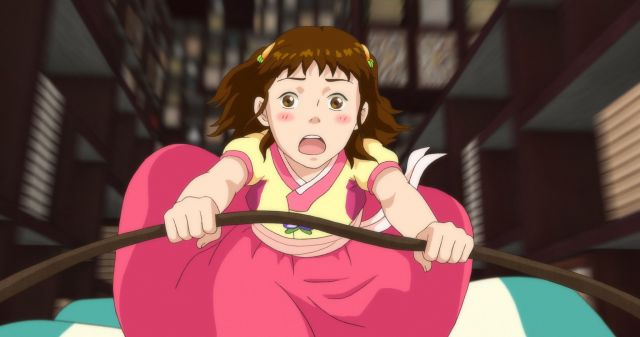 Joo-ri (voiced by Kim Seo-young) is a young girl participating in a simple traditional children's play at Changdeok Palace. On the approach of adolescence, Joo-ri is of course mortified by the prospect of her parents coming to watch and embarrass her. Yet paradoxically, Joo-ri also dreams of dancing in the spotlight herself- this is the first of many wonderful animated fantasty sequences from director Kim Hyun-ju-I, and these only increase in prominence as a chance encounter thrusts Joo-ri into the spirit realm, with all the joys and danger that experience entails.

"Moonlight Palace" is a classically styled voyage to the unknown, with an emphasis on spectacle as Joo-ri comes to understand the strange but beautiful logic of the spirit world. It's a storytelling tradition that stretches back to ancient times, although as far as animated feature films go the main obvious modern influence is Studio Ghibli. The imagery, however, all derives from traditional Korean culture, with special note being made of traditional clothing, food, and architecture.

Sequences related to this exposition are an experience in themselves, as even a traditional palanquin takes on queer dimensions in the spirit realm. The effect is especially pronounced in action sequence, where generally normal human movements are constantly contrasted with the vividly weird atmosphere. "Moonlight Palace" maximizes the potential of the animated format by constantly providing us with images that would be nearly impossible to replicate in real life, while still grounding this spectacle around Joo-ri in such a way as to make everything easy to relate to.

Making sense of the plot is...somewhat more difficult. In contrast to the aggressively nonsensical storytelling of "The Satellite Girl and Milk Cow", the story in "Moonlight Palace" is pretty straightforward. Joo-ri gets stuck in the spirit realm and tries to leave. Thematically too, "Moonlight Palace" is pretty easy to parse. Joo-ri's companion Darami (voiced by Kim Seul-gi), like Joo-ri herself, tried to take the spotlight rather than work with a team, with disastrous consequences.

While all that is fairly transparent, for the life of me I can't make any sense of the final setpiece, which involved a massive confrontation between shadow guards, rock spirits, elderly bat servants, tiny dolls, Won (voiced by Kwon Yool) atop his dragon, Miss Plum (voiced by Lee Honey) with her magical rope...thing, the nominal villain, and the giant tree spirit whose interest in the proceedings was unclear to me. Then in the real world the mountain spirits behind Buggaksan and Namsan stop bickering in order to hold back some sort of natural disaster which is related to all of this somehow.

The funny thing is, I didn't really notice how little sense any of this made while I was actually watching "Moonlight Palace". The film is so visually engrossing that I was just constantly left wanting for whatever beautiful aspect of the spirit realm director Kim Hyun-ju-I was planning on showing off next. The animation in "Moonlight Palace" is stunning and distinctive while still feeling oddly familiar, giving the strong feeling of a vivid dream brought to life.