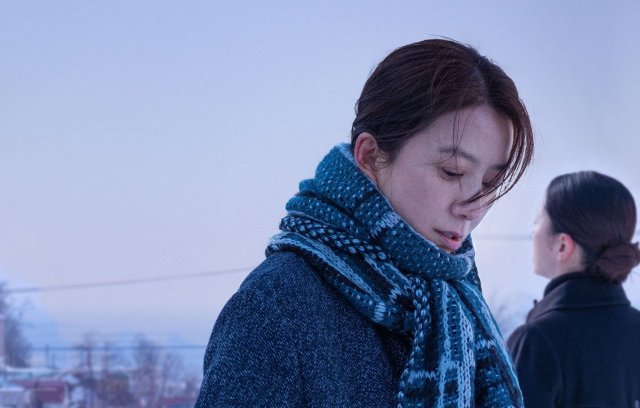 Sae-bom (played by Kim Sohye) is a teenager who lives awkwardly with her divorced mother Yoon-hee (played by Kim Hee-ae). Because Yoon-hee is highly uncommunicative and aloof, even apparently cruel statements from Sae-bom appear to have little effect on her. Sae-bom's adolescent curiousity is ignited when she finds a mysterious letter, which prompts a meticulously planned trip to snowy Hokkaido in Japan, where Sae-bom hopes to find answers about who and why her mother is.

That very basic plot summary makes "Moonlit Winter" sound quite a bit more straightforward than it really is. This is a movie filled with characters who have aggressively passive personalities which avoids spelling anything out explicitly. As one obvious example, June (played by Yuko Nakamura) is a veterinarian living in Hokkaido, and has little obvious purpose in the story save for that she talks to the people around her in the same distant, prickly manner that Yoon-hee talks to Sae-bom.

What Yoon-hee and June have in common, save for their shared past experience, is a feeling of subliminated rage at the world that expresses itself, however accidentally, in their daily interpersonal reactions. These relationships are quite a bit more complex than is initially obvious. In the few scenes where Yoon-hee interacts with her police officer ex-husband Yong-ho (played by Kim Hak-sun) we can see obvious anger on Yoon-hee's part, but it's hard to tell who she's mad at. Even more quizzically, Yong-ho is extremely patient when it comes to telling Yoon-hee this one very important thing, which provokes a rather unexpected emotional outburst.

Another intriguing male contrast is Kyeong-soo (played by Sung Yoo-bin), who plays Sae-bom's boyfriend. Kyeong-soo is remarkable in that he is for the most part completely unremarkable. The two of them have a relationship that is playful and physical, yet oddly bashful, especially in the pretty snowscape. When Yoon-hee runs across the two lovers she is surprisingly nonjudgmental. Yoon-hee is sincerely surprised when Kyeong-soo later describes her as super-cool because she photographs well.

There's another critical irony at play. Though both Yoon-hee and June come off as assertive, enigmatic women, and are viewed with admiration and respect by the people around them, neither of them really understand this. A conversation June has with the older Masako (played by Kino Hana) really typifies this, as an otherwise mundane and mildly amusing anecdote from Masako takes on vaguely sinister connotations through June's eyes. We're left wondering, is that really all there is, or does Masako like June harbor horrible secrets whose shockingness she overrates?

And that's really the greatest irony of all. By the time writer/director Lim Dae-hyeong gets around to the horrible secret that defined Yoon-hee and June's lives... it doesn't really seem like a horrible secret at all. It's just an explanation that doesn't even really explain all that much, but it explains enough that Sae-bom finally really gets her mother, a mystery of a bygone era. At the end, that's all any of us can really grasp about our parents. Yet that, alone, will have to do.