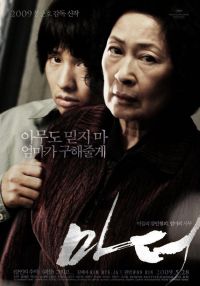 The opening scene is quite enchanting. The veteran actress Kim Hye-ja is in the middle of a dry and open grass field wearing a blue and violet dress. She turns to look behind her and then begins to dance. She carelessly waves her arms in the air and when the soft funky jazz track kicks you will have already been primed with the all important question of "why?". It's strangely humorous and disconcertingly ambiguous, setting the perfect tone for the events that follow.

Yoon Do-joon (Won Bin) is not all there. He is mentally on the slow side and is under the sole care of his over-protective mother. Won Bin puts in an excellent performance here and his character really jumps off the screen as a result. Deeply comical moments exist between him and his mother that distract from the true sadness and heartbreak that lies beneath.

Yoon Do-joon's mother sells herbs and also practices acupuncture illegally within her local community. She is the archetypal mother in her desire to protect Yoon Do-joon from harm. Tunnel vision is an appropriate way to describe her as she prioritises her only son's well being. Bong Joon-ho uses a simply visual motif early on of her cutting herbs while staring out from her shop at him. Her guillotine is heard off screen and with each slice you feel concern for this woman who's not giving her full attention to the giant blade she is wielding. But although the love and concern she has for her son is not unusual in itself, it becomes clear that her current feelings might be more a result of guilt than unquestionable motherly love.

Late one night Yoon Do-joon stumbles home from a bar. While navigating a series of narrow alleys he spots a schoolgirl and makes light verbal advances. The girl darts down a dark alley and throws a large rock at him as he passes. The next day the girl is found dead, spread over the railing above their previous nights encounter. Yoon Do-joon is then arrested and, due his limited mental capacity, signs a confession for her murder even though he actually doesn't recall anything of the sort. At this stage of the story sympathies for him and his mother run high. They are extremely likeable and a pleasure to watch, the arrest is a sad awakening to our perceptions of both Yoon Do-joon and his congenial mother.

Yoon Do-joon's mother then becomes obsessed with proving his innocence. She instructs him to do all that can to remember what happened that night while she investigates. The film dives into a mystery of sorts and what she discovers, as well as how she deals with it all, makes for one great film.

Bong Joon-ho's "Mother - 2009" has been showered with awards and let me just say that they all are rightfully justified. The narrative is captivatingly paced and the acting is superb. The story is layered with thought provoking ambiguities that really allow for meaningful retrospections on the film. After the film I kept on drawing parallels to Lee Chang-dong's "Poetry" (which I watched before "Mother - 2009") in terms of problematizing the Korean mother-son relationship as well as characters' handling of an undesirable reality. In any case, "Mother - 2009" made me laugh, gasp, hope, and, not surprisingly, want to watch it all over again.

Please feel free to comment on this review. Discussions are welcomed!

Available on Blu-ray and DVD from Amazon and YesAsia