Shin Sang-ok had found a recipe for success in the 50s, with his melodramatic approach and the exceptional Choi Eun-hee as his protagonist, which he continued, for the most part at least, during the 60s. In this case however, he added an element, that of a child actor in the protagonist role, which allowed him to induce his narrative with more cheerfulness and a sense of comedy, although the dramatic basis remains the central element.

The movie starts with a delightful narration by a little girl, accompanied by child's drawings, that introduces us to the main setting of the film, that of a house inhabited by "three widows" as the neighborhood calls them. The title is mockingly accurate, since Ok-hee, the aforementioned girl, lives there with her windowed mother, her widowed grandmother, and the widowed housekeeper. As the story begins, Ok-hee's uncle brings along a new tenant, a man this time, Mr. Han, who rents a room in order to be able to paint. Three of the four women are immediately affected by his presence, with the housekeeper being eager to flirt, Ok-hee seeing at him the missing father figure, while, inevitably, a sympathy is formed between Mother and him.

The movie begins rather cheerfully, essentially moving more towards the comedy, particularly through the interactions between Ok-hee and another character, a seller of eggs, whose advances towards the Housekeeper are just hilarious, as much as their overall rapport. This approach carries on for a large part of the duration, and along with the will-they-won't-they between the painter and Mother, allows the narrative to be quite entertaining, particularly since this romance is juxtaposed with the aforementioned one, which moves rather fast after a point. The same applies to the interactions between Mr. Han and Ok-hee, with the painter seeming to enjoy the company of the little girl. 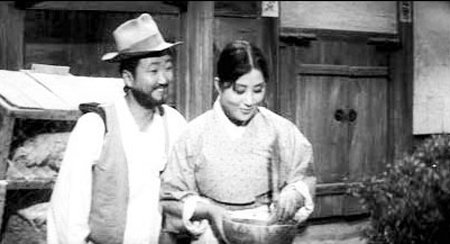 However, when things become serious, the narrative takes a familiar turn towards the dramatic, beginning with Mr. Han's reaction when Ok-hee tells him she would like him to be her father, and continuing with the imposing presence of the grandmother, who is also a deacon in the local church. Han Eun-jin is great in the role, as her character seems to personify the then previous generation, apart from the Christian rules, with her being radically against extra-marital affairs, intensely conservative, and always eager to pass judgment on the basis of "what will people say". Her "holy anger" spares no one, including the Housekeeper, while her presence is essentially the main obstacle in the relationship between Mother and Mr. Han as much as the main instigator of the melodrama in the movie.

Shin Sang-ok handles his material, which is based on a novel by Jo Yo-sup, as excellently as usually, allowing his characters to be fully presented and analyzed through their interactions, while getting a great performance by Jeon Young-sun as Ok-hee, who is essentially, the protagonist of the movie. His effort to appeal to the audience is evident once more, but Shin was experienced enough by that point, to not allow this aspect to detract significantly from the overall quality of the movie, which definitely rises above mainstream cinema. The fact that the whole film is presented through the perspective of the little girl, definitely helps in that regard, as much as in the way his focus is on the lives of the female characters. 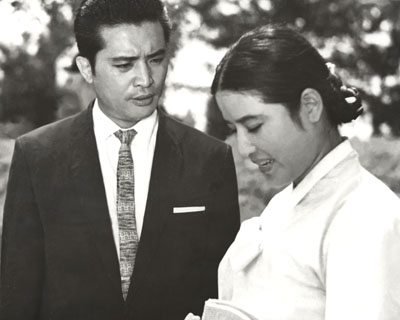 His chemistry with Choi Eun-hee who plays Mother, is great once more, with her highlighting her inner struggle in the most eloquent way, in a role she played a number of times for Shin Sang-ok. Kim Jin-kyu as Mr. Han has a similar role and is also quite good, additionally showing a reluctance that is one of the crucial elements of the narrative. Do Kum-bong as the Housekeeper and Kim Hee-kap as the egg seller are the main sources of comedy, and in that regard, perform quite well, while their acting in the dramatic scenes in equally convincing.

Choe Su-yeong's cinematography implements the extended house grounds in the best way possible, in a film that frequently functions as a stage play. Yang Seong-ran's editing induces the movie with the usual, relatively fast pace Shin usually implemented, which serves its episodic nature quite nicely.

"Mother and a Guest" is another very easy to watch movie by Shin Sang-ok, particularly through the entertainment it offers.