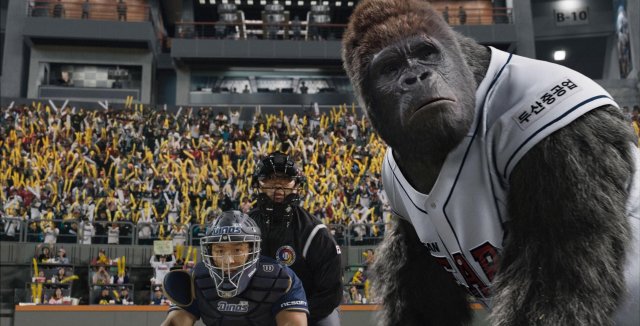 In an interesting creative choice, writer/directer Kim Yong-hwa opens "Mr. Go" up with an in-universe documentary video depicting the absurd circumstances by which a circus gorilla learned to play baseball. Ace agent Choong-soo (played by Sung Dong-il) has a scheme by which the title character can make him loads of money. That is, provided "Mr. Go" doesn't eat too many of the expensive exotic plants in Choong-soo's apartment.

"Mr. Go" is a delightfully whimsical movie, noteworthy mainly for its surprisingly sincere depiction of a generally absurd situation. It should come as a surprise to no one that "Mr. Go" isn't really about baseball at all. The premise is mainly just sets up montages and setpieces where the star gorilla slams home runs to the roaring cheer of the crowd. There's a charming innocence to the proceedings, which makes the normally lurid practice of throwing bananas at players during a sports game feel quite charming.

The cast deserves the bulk of the credit for this sheer good-naturedness. Choong-soo is a highly devious figure who's not really a bad person so much as he is unapologetically self-interested. Wei Wei (played by Jiao Xu) is a teenage girl with powerful big sister energy who doesn't just look after her familial gorilla but the rest of the circus orphans too. Wei Wei's dreams of bringing the circus back, while sounding preposterous in general, proved infectious not just to Choong-soo but myself as well.

This sense of good cheer even extends to the initial nominal antagonists, a group of loan sharks led by Shaokang (played by Kim Hee-won). Despite being presented as dangerous figures, at one point threatening to sell circus orphans to slavery, Shaokang ultimately develops a strong sense of camaraderie with his own gorilla. Compassion and understanding evolve as major themes, conquering all barriers between humans and gorillas.

All of this doesn't even get into the technical marvel of "Mr. Go" himself, a surprisingly convincing early piece of work from the now famed special effects company Dexter Studios. It's not just that the gorilla's own movements and expressions are naturalistic. Sung Dong-il and Wei Wei are likewise sublime in interacting with the title character as if he was really there. A scene where Choong-soo foolishly decides to drink rice wine with the three hundred kilogram beast acts as a hilarious setpiece for male bonding.

The main flaw "Mr. Go" had is that it was behind the times. The innately silly 2013 project had to compete with serious high concept works of "Snowpiercer" and "The Terror Live" at the box office. Most people weren't really willing to look past the surface level and just dismissed the movie's subject matter as inherently absurd. I was one of them. But looking back at "Mr. Go" in retrospect I'm sincerely impressed with how well it's aged, an oasis of sincerity predating an era of film that's become increasingly and unsubtly pandering. Dexter Studios has continued to this day to set "Mr. Go" as the background image for their website for good reason.