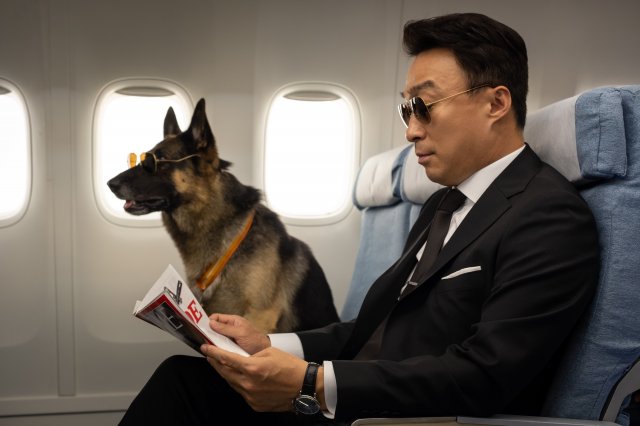 The titular Mr. Zoo (played by Lee Sung-min) is a special government agent with a critical weakness- he hates animals. Normally this isn't important to his work, except that the latest big project involves working as a security detail for the famed Panda Ming-Ming (voiced by Yoo In-na). Ah, right...in case you haven't seen any promotional material, the main premise of "Mr. Zoo: The Missing VIP" is that Mr. Zoo can hear animals talk. Also the titular VIP is Ming-Ming, who is a Very Important Panda.

This kind of silly joke predominates most of "Mr. Zoo: The Missing VIP". Most of the humor is of the bizarre and silly variety. Take the obviously discordant animal voices. Lee Soon-jae voicing a grouchy hamster demanding someone buy him proves weirdly compelling. In one decided moment of irony the highly trained military dog Ali (voiced by Shin Ha-kyun) refuses to do one very specifically disobedient action in the midst of an outrageous setpiece wherein he manages to almost completely destroy Mr. Zoo's home.

Ali is, weirdly enough, the movie's main bright spot. In contrast to most animal-themed flicks which cast multiple similarly looking dogs as the main star, Ali is played by a single exceptionally well-trained animal. And somehow, that animal has great chemistry with Lee Sung-min. He brings in the perfect mix of cute and judgmental with regards to Mr. Zoo, a man who is not terribly likable even when he's being sprayed with urine.

...Yes, it should probably be noted that in addition to being bizarre and silly "Mr. Zoo: The Missing VIP" is horribly crude. Another weirdly offbeat joke that belies the movie's low age rating involves a gorilla voiced by Lee Jung-eun leafing through a National Geographic magazine as if it were a Playgirl centerfold. Yes, that's right, the same Lee Jung-eun who appeared in "Parasite" and won quite a few awards for her performance, is seen here playing an undersexed gorilla.

As tremendously goofy as the gags in "Mr. Zoo: The Missing VIP" are I can hardly pretend like they aren't memorable. How else can I describe the use of cheese sticks to repel a menagerie of assassins? An apparent love interest that just ends up being an old dude with shared military experience? Barrels roll down a hill in one sequence obviously telegraphed the minute our plucky heroes get to the top of a hill. And of course, there's the old, thing that appears to be water isn't actually water trick.

There's no classy way to sell any of these extremely cheesy low-effort gags. Yet for all its questionable plotting, including a villainous white guy with about the most counterintuitive motive I've ever seen, "Mr. Zoo: The Missing VIP" manages to be funny when it matters. This is also true even when the joke usually isn't anything much stronger than just, animals sure are wacky, obvious CGI artifacts. For all its flaws "Mr. Zoo: The Missing VIP" has earned my grudging respect just for being unapologetically stupid in a way that jives well with its concept.