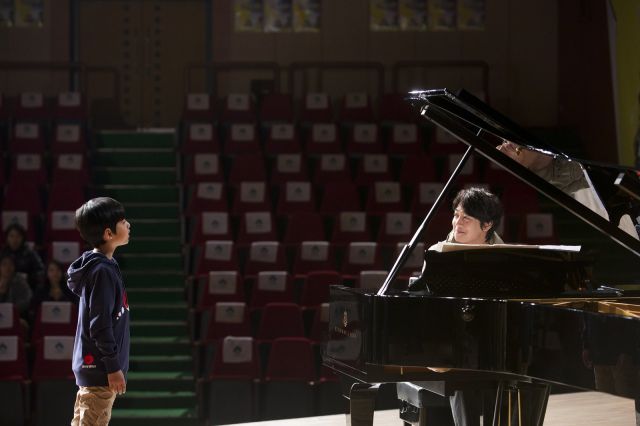 Il-han (played by Kim Rae-won) is a bitter musical director who feels his talents are being wasted on a live-action children's program. Through the intercession of his friends, Il-han gets a spot on a variety show where he (and four other professionals in the industry) take the role of mentoring young, talented children for an elimination-style competition to see who can pull off the biggest Broadway-style showtunes showstoppers. Il-han is enchanted by the voice of Yeong-gwang (Ji Dae-han-I)- discovering only too late that his charge is half-Filipino.

Il-han, in addition to the stock flaws of being a jerk to his friends and caring mainly about his career, is also a mild racist. He has trouble figuring out at first whether Yeong-gwang is Filipino or Malaysian, and regards the kid with mild disdain. Even when they start doing well in competition, Il-han continues to see the contest as a proving ground for his own talents and makes a point of keeping separate from anyone he sees as beneath him.

But Yeong-gwang is much more than a plot device to make Il-han feel better about himself. Ji Dae-han-I portrays the kid with a lot of heart, and the scenes where he's dealing with casual racism at school, or fighting his mother about going back to the Phillipines have a real emotional depth to him. Yeong-gwang has to deal with issues quite similar to what actual multiracial kids in Korea have to deal with on a day-to-day basis and Ji Dae-han-I's reactions in these situations are quite convincing.

The plot, while interesting in all these ways, is still mostly stuff we've all seen before. So "My Little Hero" makes sure to go all out on the showtunes numbers. Not just Yeong-gwang, but all his rivals have excellent showpieces that glitter with style and make expert use of the camera to give it the true feel of a Broadway production while also adding just enough movie magic for the sequences to feel like a unique contribution to film rather than slavish dedication to their original form. While we see few of these performances in entirety, there's more than enough material to keep audience attention riveted between dialogue-driven scenes that more directly move the story forward.

This is another credit to the movie's direction. All of the songs, even the ones sung by the rivals, have a certain relevance to Il-han and Yeong-gwang's character arcs, though for the most part they're singing Broadway standards rather than original songs. This makes for particularly effective jump cuts during the numbers to what other characters are doing or thinking, and so "My Little Hero" comes off effectively as a cohesive whole. The last showstopper in particular is a heartbreaking metaphor for one of Yeong-gwang's conflicts throughout the movie. And for the audience, too, it's a rather introspective one given the nature of Yeong-gwang's problems.

The plot behind "My Little Hero" is solid (if well worn), the movie is expertly put together, and the musical sequences are great. It's not a movie that will win awards for transcending art form, but it does do a great job of giving the audience an uplifting message while reminding us that, hey, we could stand to be better about this stuff, too. Absolutely required watching for Broadway fans (especially those curious about how musical culture functions in South Korea), and a nice fun way to spend a couple of hours for everyone else, too.