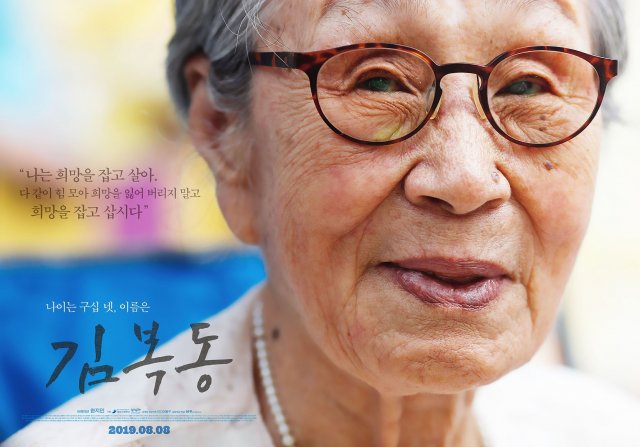 Director Song Won-geun-I opens "My name is KIM Bok-dong" up with just a black screen, and then the voice of the titular activist. Whatever visual flourishes "My name is KIM Bok-dong" may have to offer, the reason why the woman was important was because of her voice. There was mundanity in that voice, just describing everyday activities, be it in the present day as an old woman or in the past as a sex slave.

Kim Bok-dong goes over her life story and it isn't really all that interesting. Back in the forties, she thought she was going off to work in a factory. Instead, she had to work in a brothel. There's no real sense of anger at the Japanese specifically. Kim Bok-dong is upset internally, literally and figuratively, because she can't have children as a result of what happened at the camps. She spares us the grisly details.

That omission is significant Kim Bok-dong isn't making a play for sympathy. She's stating what happened in a very matter of fact way. The contrast quickly takes a turn for the strange as we see Kim Bok-dong initiate and then doggedly continue a protest movement demanding recognition for Japanese crimes committed during World War II. To the Japanese Kim Bok-dong is a bloodthirsty idealogue who won't settle for any kind of compromise.

That's halfway true. Kim Bok-dong doesn't settle for compromise because there's nothing to compromise on. She doesn't want anything tangible. She wants the Japanese government to acknowledge what happened, and move on. Kim Bok-dong doesn't expect gratification- she's happy merely to be present anytime a new Statue of Peace is set up. Its literal Korean name, The Girl Statue, is similarly generic, communicating only the idealogy of remembrance.

In one long and informative section the artists behind the Statue of Peace explain how and why they designed the statue the way they did, and its message. Again there's no real sense of confrontationalism. Like Kim Bok-dong, the artists see themselves as stating facts which they consider to be entirely uncontroversial. To them the Japanese government is stoking the controversy by always equivocating on what they consider an apology to be.

We see plenty of footage of Japanese lawmakers describe in their own words why they consider the matter solved and not worthy of discussion. An epilogue shows how the most recent attempt by the South Korean and Japanese governments to solve the impasse was ended on the Japanese side. We are left to remember for ourselves that it was shortly thereafter for technically unrelated reasons that Japan started a trade war.

But by and large "My name is KIM Bok-dong" isn't really about Kim Bok-dong or the Japanese government or the comfort woman dispute persay. The documentary is a chronicle of how the comfort woman established itself over the last thirty years. Kim Bok-dong's death is actually an intermediate point rather than an end one, because her death was inevitable. The real advocacy was always about taking her words to heart, and how they have been remembered.

"[HanCinema's Film Review] "My name is KIM Bok-dong""
by HanCinema is licensed under a Creative Commons Attribution-Share Alike 3.0 Unported License.