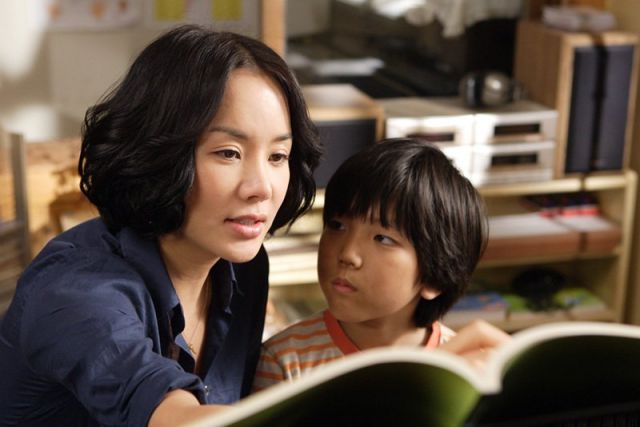 Ji-soo (played by Uhm Jung-hwa) is an assertive ambitious woman who has recently come to accept the fact that she'll never be a world-renowned pianist. It's not her fault- Ji-soo has the talent, but inevitably her working class family ran out of the funds necessary to support this dream. So now Ji-soo has to accept a substitute fantasy- to simply be the piano teacher of a child who will later become a world-renowned pianist. But this aspiration, too, is hobbled by the fact that Ji-soo lacks access to young virtuosos. Also she doesn't particularly like children.

The main substance of Ji-soo's character arc is her relationship with an abrasive young boy by the name of Kyeong-min (played by Shin Ee-jae). Unsurprisingly, in narrative terms, he's exactly what Ji-soo needs in order to achieve her dreams. Equally unsurprisingly, it's the budding emotional relationship that changes Ji-soo's attitude rather than Kyeong-min's abilities. Where "My Piano" gets surprising is its general take on reality.

Ji-soo is cash-strapped. Kyeong-min is an orphan. And director Kwon Hyeong-jin isn't presenting some magical reality where in the end love conquers all. Ji-soo and Kyeong-min are both real, stressed out people who feel excluded from their social communities and lash out at everyone around them. Ji-soo's character journey is about realizing that there are more important things in life than her own ambition or romantic fantasies. As the adult in this relationship, it's Ji-soo's job to use her identity give Kyeong-min the chance she never had.

The emotional punches in "My Piano" are harsh- but don't worry. There's plenty of decent comic relief scattered throughout the proceedings. Park Yong-woo features prominently as Gwang-ho, a pizza shop manager who becomes smitten with Ji-soo, and frequently responds to her obvious lack of interest with awkward dialogue and even more awkward laughter. His presence is a constant reminder that even apparently useless people can somehow manage to find joy out of nothing.

And that's what Ji-soo discovers- that happiness is where you choose to find it. This is spelled out somewhat better in the expanded version of the film, where we see what Ji-soo's overall life is like in the wake of the epilogue. What it boils down to is that she now acts like an actual piano teacher- emphasis on teacher, not piano. Ji-soo now appreciates the mindset of children, and through this, even if she fails to accomplish her dream, Ji-soo is able to live a generally respectable life.

But the normal cut is pretty nice too, with a stronger emphasis on emotional catharsis. Which makes sense really- the relationship between Ji-soo and Kyeong-min is what defines the film after all. That and the piano music. Very lovely piano music by the way- it's easy to see why Gwang-ho, far from being annoyed by all the upstairs noise, is actually fully enamored by it. That's what Ji-soo ultimately truly appreciates- making a difference to the life of anyone, not just the life of some obviously special person, is what real joy is all about.

"My Piano" (also known as "For Horowitz") is directed by Kwon Hyeong-jin and features Uhm Jung-hwa, Shin Ee-jae and Park Yong-woo.