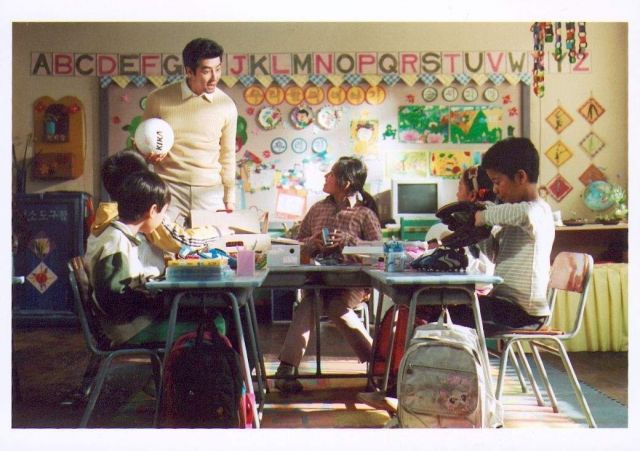 With "My Teacher, Mr. Kim" writer/director Jang Gyoo-seong sends a love letter to South Korea's dying rural communities. There's no creature comforts, and hardly any people. But then that's the main positive. Mr. Kim (played by Cha Seung-won) has an elementary school class in Seoul filled with a generic morass of indistinguishable children. Mr. Kim is a slacker at heart, and with so many teachers also floating around campus, who's going to notice a single guy not taking his job seriously?

Upon predictably being noticed, Mr. Kim ends up having far greater intimacy with the population of the village than he ever did with anyone in Seoul simply because there aren't as many of them to keep track of. Shameless in Seoul, Mr. Kim reluctantly has to at least pretend to be a serious teacher out in the mountains because child and adult alike look at him with such mighty expectations in their eyes. They're too guileless to detect Mr. Kim's selfish motives.

Yet these characters are never depicted as being particularly naïve. Rather, they're just focused. In the sixteen years since "My Teacher, Mr. Kim" was first released, South Korea's educational system has taken a beating. Reforms intended to crack down on the sinister culture Mr. Kim represents have created a dreadful environment where students study solely for the sake of getting a job, and are frequently stressed to the breaking point in the name of fairness.

What makes the rural environment in "My Teacher, Mr. Kim" so refreshing is that we see many people, adults included, who find learning helpful for its own sake. Do they want to know more about the world? Sure- but they're still kids who enjoy kicking a ball around, and go to school for the social life as well as the educational one. Mr. Kim's main adjustment curve is in how everyone in this area sincerely respects educational institutions instead of just seeing them as a tedious mandatory chore.

A comedy by nature, this contrast is where most of the humor in "My Teacher, Mr. Kim" comes from. Immediate slapstick courtesy of Mr. Kim's generally unpleasant personality is the source of the movie's direct jokes. But longer subtler gags deliberately play on genre themes. For a significant portion Mr. Kim tries to play the role of inspirational teacher- and while this sort of works, the obvious irony at play is that Mr. Kim keeps trying to hype up Seoul as the land of dreams. Consider what Mr. Kim did back when he lived there. Do you think he was living the dream life?

"My Teacher, Mr. Kim" never gets that saccharine, though, because Mr. Kim himself is not that reflective a character to begin with. The message he learns by the end is a fairly universal one- that it's better to have a job where you feel like you have a purpose than it is to scam your way into some arbitrary number driven metric of success. That's a fairly anachronistic take in today's economy, which fittingly enough, also makes it very relevant.