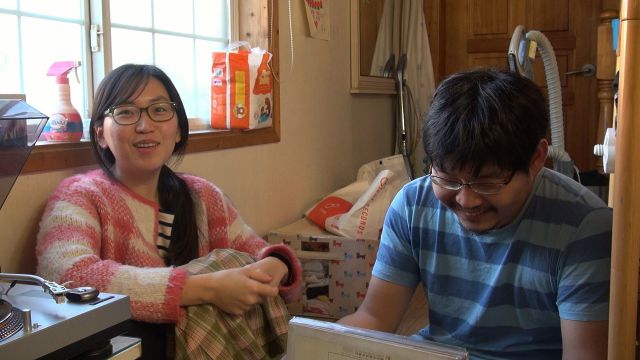 Director Shin Ho-bin is a married to a woman he did not necessarily plan to get married to, prior to her getting pregnant. Life between the three of them is actually pretty pleasant, albeit eccentric, given the goofy way she talks and the equally goofy outfits she wears around town on her bike. The main tension in the relationship comes from Shin Ho-bin's mom, who constantly finds fault with her daughter-in-law. If the English title "Myeoneuri - My Son's Crazy Wife" sounds bad, the original insult, B-Grade Daughter-in-Law, is even worse.

The mother-in-law does not come off as a particularly unpleasant character in this documentary. Actually no one does, which is surprising. Shin Ho-bin keeps happy montages of the more pleasant moments of this extended family relationship at a minimum, instead focusing on the frequent flare-ups between mother-in-law and daughter-in-law. Shin Ho-bin is frequently the intermediary between the two and bears much of their enmity.

Shin Ho-bin himself doesn't come off as all that sympathetic either surprisingly enough. He's whiny and doesn't seem to appreciate how his unwillingness to take a hard position helps exacerbate the worse aspects of the feud. It's easy enough to see his thought process and why it's wrong- and yet, we have no better idea what the right solution to the problem is. Defining the problem in the first place is surprisingly difficult, because the in-law friction is a smorgasbord of a large number of fairly minor disputes rather than a single overarching crisis.

That's where the main appeal in "Myeonuri - My Son's Crazy Wife" comes from. This documentary deals with the relatable impossibility of the extended family unit and how when it comes to questions of childrearing and filial piety, people can draw unreasonably stubborn lines in the sand without even realizing it. Then there's the snowball effect- how all subsequent fights draw inspiration from previous ones, further cementing the idea that one person or another is just plain unreasonable.

The documentary is surprisingly blunt and personal about this in part because some extremely charged footage is used. One particular dramatic fight takes place in a car, and ends with the wife demanding to be let out in a huff as their infant son calls after her. Honestly I'm a little surprised she was willing to let this footage be used. Out of context her behavior is monstrous, although it's plain to see in context that in her mind, the alternative is to send a message that she can be walked over at will.

That husband, wife, and even mother-in-law can trust each other throughout this strife is the main hopeful note of optimism. Indeed, the moment when Shin Ho-bin receives funding to turn "Myeonuri - My Son's Crazy Wife" into a full documentary film has a surprising collective feeling of celebration. That Shin Ho-bin has found success in terms of working toward a lifelong dream is considered more important than the fact that his dream now consists of showing the world how dysfunctional his family is. Such priorities are oddly comforting.

"Myeoneuri - My Son's Crazy Wife" is directed by Shin Ho-bin.