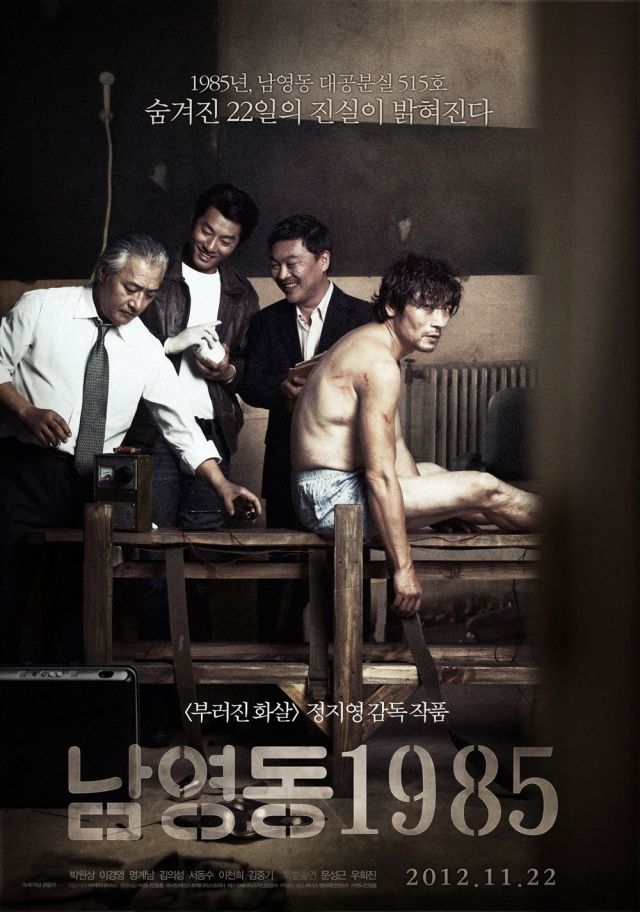 For most of this film, a man is imprisoned and tortured. Who this man is, and why he is being tortured...really aren't that important. For nearly two hours, we watch him be brutalized and humiliated by his accusers. At one point an "interrogation expert" appears who astonishes everyone by apparently killing the victimized man by filling up the lungs with water, and continuing to do so long after his prisoner has lost consciousness. When it is discovered that the prisoner is not dead, despite appearances to the contrary, the other police give the expert a round of hearty applause. And all the while, the expert sings a happy working tune.

"National Security" is a truly painful film to watch. Having grown up in Bush-era America, I'm all too familiar with the sort of enhanced interrogation that this film displays in abundance. Everyone knows what waterboarding is. That is, they know the highly clinical, harmless sounding term "simulated drowning". No one actually dies from it, you understand, so that makes it all right. Especially since we only use it on enemies of the state. Justifications like this rattled through my head often throughout "National Security". I'd heard most of the torture in this movie described before, but I'd never actually seen it. The most eloquent anti-torture editorial, the most gruesome picture, does not compare with seeing the outright cruelty actually carried out on screen.

The funny part is, those men, the ones performing the interrogations? They aren't even bad guys. They're just regular working stiffs who are even capable of carrying on a conversation with the prisoner. They get frustrated and angry the same way most of us do at a job that isn't actually making any progress. And realizing this only makes the viewing experience all the more painful. Because that was all it took for them to treat their fellow man like a vicious animal. Those four magic words. "Enemy of the State".

There's no moral platitudes, no hope, no optimism. Only cruelty and survival. This is what life is like for those so unfortunate to be condemned as mere objects deserving only of punishment. Those whose inhumanity is so clearly established that when they claim to know nothing, noone believes them. And indeed, why should we? Someone who doesn't even deserve basic human dignity can only be that way because they're so much of a monster that they'd try to lie their way out of anything. They'll lie just to force you into working overtime. Why wouldn't they? Monsters don't care. They only want to murder you and everyone you care about, if given half the chance.

"National Security" is not a pleasant film to watch, nor should it be. It exposes the hypocrisy and cowardice of any who support torture, not by using villains, but by forcing the viewer to confront head on those exact practices which sound so eminently reasonable, so routine and unremarkable, as long as we read them in dry technical reports and never have to see them personally. The man whom this story is based on, Kim Geun-tae, died last year from Parkinson's disease, which he is believed to have contracted partially as a result of his torture. He sufferred from post traumatic stress syndrome ever since those horrible events of 1985. He was able to become a prominent political figure and worked to blaze a trail for democracy. Imagine how many other good human beings were brutalized for the same spurious reasons as him. Ask yourself if you really trust anyone to actually use such a horrible instrument as torture "for the greater good". And failing that, ask your friends and family. Then show them this film, and ask them again if they'd ever wish such a fate on their worst enemy.

A final note. One of the recurring leitmotifs in this film bears a striking resemblance to "Battle Hymn of the Republic", a popular American patriotic song. I don't know whether or not this was intentional. Regardless, from now on whenever I hear its use, I'm going to remember "National Security". And I'm going to remember that as comforting as it may be to pretend otherwise, this level of human cruelty did not begin or end under Chun Doo-Hwan's regime.