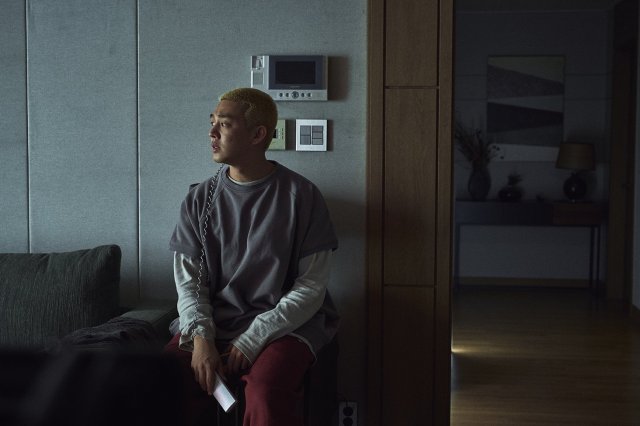 Joon-woo (played by Yoo Ah-in) is at home alone playing games online when his Internet friends start noting in confusion that there's crazy stuff happening on television. Up in his eighth floor apartment, Joon-woo looks down and sees a giant panicked mob. Then he sees some members of the mob inexplicably turn around and start biting each other. Suffice to say, Joon-woo is too spooked to leave his apartment, where he remains for most of the rest of the movie.

While many aspects of "#ALIVE" sound unique I was surprised at how generic the movie felt in execution. Joon-woo is so locked out from the rest of the world that "#ALIVE" could easily be a side story in just about any other zombie narrative. We do get some intrigue in how Joon-soo uses technology as a coping mechanism for his increasing social isolation. He has the Internet, a smart phone, a drone, a computer and a TV set. These objects vary in usability throughout the movie, suffering all manner of technical problems and physical damage.

Yet none of these objects were in quite as much focus as I was expecting. The action scenes in "#ALIVE" are technically competent but mostly irrelevant to the premise. This works well enough when Joon-woo is going through an emotional breakdown in response to bad news from the outside world, but the entire final act of the movie revolves around a plan that simply doesn't make much sense. This is especially silly considering how smart the lead characters were shown to be when it came to surviving inside their apartments up until that point.

Ah, that reminds me. Yoo-bin (played by Park Shin-hye) is another survivor in the apartment building. Her very existence is a plot twist which has been hopelessly ruined by the movie's marketing. Anyway, where Joon-woo dabbles in technology, Yoo-bin is an avid camper. She seems well-adjusted to solitude, even as we get hints Yoo-bin isn't quite as tough as she looks. The interactions between Joon-woo and Yoo-bin are excellent because we see them utilizing their generally unique survivability strengths to pool resources and help each other.

There's just not enough of this creative problem-solving is the main issue. For a movie that's only about ninety minutes long there's a surprisingly large amount of filler, including a generally pointless extended stay in a third apartment. Generic zombie setpieces tend to predominate over the more compelling character-driven moments, which is a real shame. Yoo Ah-in and Park Shin-hye both show excellent quiet acting range, simply because for most of the movie they don't really have any reason to talk.

On that note, one of the subtler issues plaguing "#ALIVE" is just a lack of genuinely interesting cinematography. The apartments we see look too big and pleasant. They're poor proxies for depicting characters slowly going insane because the world as they know it has been destroyed and they're just buying time for an escape that may well be impossible. "#ALIVE" plays its setting too safe, and while the end product is certainly watchable, it's ultimately nothing special.