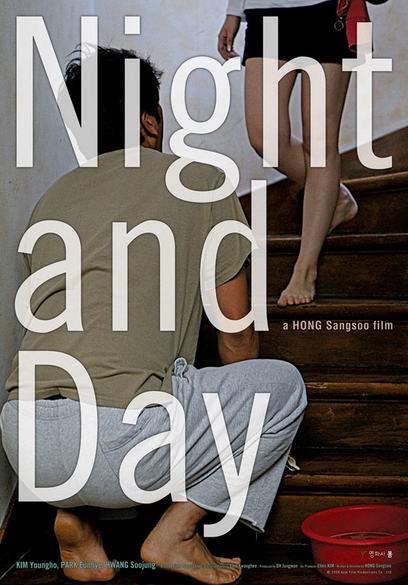 Paris is, supposedly, the most cultured city in the entire world. For an artist, it would seem like the most natural possible place to hang out indefinitely while trying to outwait a drug bust. But Seong-nam (played by Kim Young-ho) quickly discovers that without a guide or any meaningful connection to the local environment, Paris is pretty indistinguishable from any other random place he could be hanging out.

"Night and Day" covers Seong-nam's rather unremarkable stay in Paris. It's a journey that frequently seems to veer very close to becoming interesting, only to fizzle out before much of anything happens. His days are measured in terms of largely random anecdotes with only the vaguest, usually unsatisfying hints of a possible continuance. It's pretty boring. And yet in a way that's true to life.

It's a common fantasy to want to go to a foreign land and have an adventure. But for a normal person this is a lot harder than it sounds. It's not like other countries have wackiness popping out of every street corner. The day-to-day life really isn't that much different from whatever's going on a home. Except that there's more free time and less people you can talk to- so it just becomes a lot more work trying to stay entertained when nothing even seems to be happening. The goofiness that happens instead is just a little sad and pathetic- but it's better than being bored. And it's at least random enough to be worth a surprise laugh.

The strange part is that early on Seong-nam gets a chance to go on an adventure- and rejects it because he has enough sense to realize that it's a terrible idea. Much later in the movie he finally becomes bored enough to talk himself into an adventure on a rather questionable pretext. The aftermath of his weak justifications prove especially comical when Seong-nam inevitably realizes that he's acted selfish, stupid, and accomplished absolutely nothing. Not even an interesting story- in his desperation to do something interesting he actually manages to do something even more banal and worthless than his random wandering around. This, too, is funny- ironically for the same reason as his meandering everyday life.

When "Night and Day" is funny and a joke genuinely connects, it's utterly fantastic. Seong-nam has just enough maturity to realize when he's close to making a mistake, or acknowledging it, but not enough to figure out what he needs to do to break out of his malaise. The many days of his trip blend together- and I have trouble remembering them all, but they're all Seong-nam likely remembers. It probably reflects badly on him that some of these moments are just extended, relatively mundane dreams.

This is an entertaining movie. Unfortunately, it never really transcends art form, and there are moments where it just feels boring and pointless- never mind the fact that boring, pointless humor is the whole raison d'être, it just doesn't always feel convincing. "Night and Day" is a comedy for people who are sick of getting all their laughs from wacky adventures. Just know that going into this movie- Seong-nam's expedition is, by design, a forgettable one.