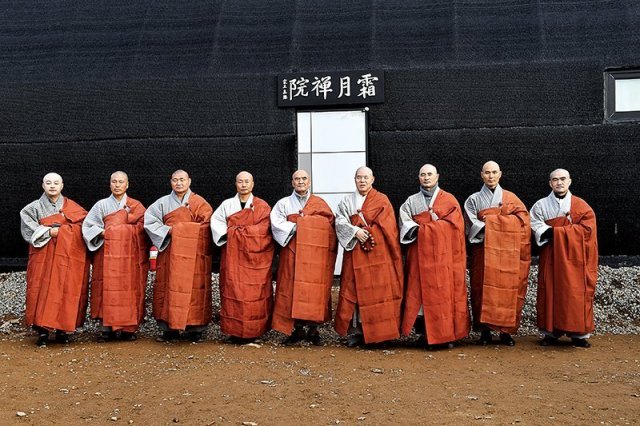 In November of 2019, nine monks voluntarily sequestered themselves for ninety days in a spiritual ritual which, we are repeatedly told in the text, was unprecedented. I could never quite catch why the ritual was so unprecedented. But clearly some people were very impressed by it, given that crowds and television crews witnessed the monks both entering and leaving their specially constructed tent with much fanfare. Apparently the sequestration was big news on South Korea's Buddhist Television Network (BTN).

I do not much watch this network, as I am not Buddhist. And I suspect my ignorance in general was my biggest obstacle to appreciating "Nine Monks". I had no idea who any of the titular monks were and director Yoon Sung-jun did not seem particularly interested in explaining their identities to me. They all appear to have some sort of hierarchical position within the Korean Buddhist Order, which would presumably explain why their voluntarily sequestering themselves was such a big deal.

Now, a ninety day sequestration might sound like a big deal to you. But quite some time ago I watched a very different Korean Buddhist documentary known as "The Gateless Gate", where eleven elder Korean Buddhists isolated themselves for a thousand days. There were no camera crews or crowds to mark the beginning or end of their contemplation. Consequently "The Gateless Gate", with its extended, gentle, and quiet camerawork did a very good job communicating the isolation of its Buddhist devotees, offering a brief glimpse of the nirvana these people were seeking, even as it meant delaying possibly critical medical treatments.

There are no such contemplative moments in "Nine Monks" which is so obsessed with the theological underpinnings of its ritual and the tangible realities of the physical structure the monks are housed in that the actual personal spiritual meaning of the ritual almost completely eluded me. It didn't help that the formatting of "Nine Monks" is very weirdly rushed. Religious explanations are written in highly stylized script that is difficult to read, and these explanations also blaze past the screen really fast.

Far more problematic than just the speed of explanations is that the aggressively short runtime of "Nine Monks" gives these teachings almost no time to really sink in. One of the perverse ironies of this is that the monks themselves are doing the ritual largely so they can be reflective in humility. They go hungry on purpose. They allow themselves to be whacked with a nasty stick. And of course, the tent as a whole is often not comfortable, and must be frequently cleaned.

So it's really just incredibly weird that the documentary's tone does not itself reflect this. The whole project feels more like it's hyping up a major public relations event for the Korean Buddhist Order than it is actually being usefully informative. While I can be sympathetic with director Yoon Sung-jun in part for somehow managing to edit countless hours of footage into a coherent documentary in just a few months, the lack of polish in the presentation here is quite glaring.