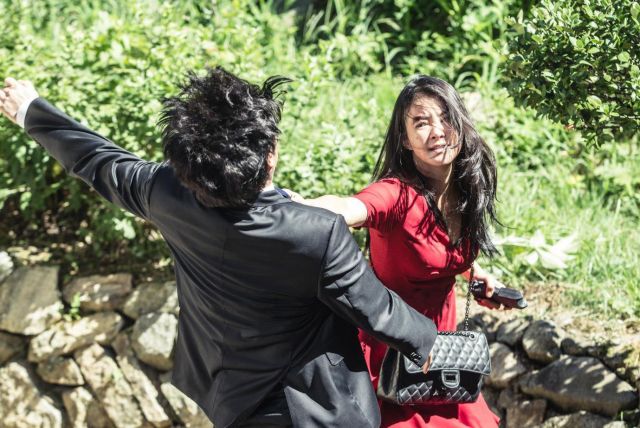 The opening scene, with its emphasis on a cool-looking Ford Mustang and Lee Si-young sporting a very attractive red dress, gives "No Mercy - 2019" a rather voyeuristic feel. But that only that lasts up until the point she finally engages someone in conversation. It doesn't end up going well for the guy under the car. And so the purpose of the film is quickly established. In-ae may look pretty, but she's not here to make friends.

"No Mercy - 2019" is, from a social commentary perspective, a bitterly cynical movie. Where "Unstoppable" at least featured the police as a token physical presence, here they're reduced to a single unhelpful phone call. Backstory to the effect of how In-ae was only just released from prison initially seems to explain how In-ae's younger sister Eun-hye (played by Park Se-wan) fell in with the wrong crowd. But further flashbacks flesh out the reason why In-ae went to jail as In-ae herself inches closer to the final villain.

As narrative storytelling goes "No Mercy - 2019" leads us along through the use of bread crumbs. In-ae starts with the last person she knows must have seen Eun-hye and goes to the next person the mentally challenged high school student was handed off to. Interestingly enough, while Eun-hye makes one obvious boneheaded decision, for the most part she has a decent survival instinct. Unfortunately, survival instincts are of limited usefulness when nearby people are content to just let horrible crimes play out in front of them rather than get involved.

Hence the bone crushing. In-ae is a practitioner of Korean Special Forces Martial Arts. The name sounds a lot less ridiculous in Korean. The purpose of such training is to disable opponents in close combat, and this is what the many fights in "No Mercy - 2019" amount to. In-ae's superior technique is up against brute force- the longer the fight lasts, the worse she does, because all In-ae needs to win is a single decisive blow.

While In-ae doesn't kill most of the men she runs into, this is more a matter of practicality than restraint. She's just in a hurry. And that frenetic tone is what sustains "No Mercy - 2019" for its steady and efficient ninety minute runtime. Director Lim Kyeong-taek does not mess around here. This movie is tightly edited, and we can always tells at a glance what kind of scumbag In-ae's going to come across next through brief, effective exposition.

One goon in particular stands out for showing uncharacteristic remorse rather than rationalization as regards his despicable immoral behavior. This too, goes to the film's greater moral point. Institutions can't be trusted. They would sooner bully an honorable man into doing evil deeds than behave with any sense of basic decency. The grand tour "No Mercy - 2019" gives us of South Korea's nasty underworld and its connection to the upper one is critical to the film's proferred sense of satisfaction. The bad guys have to die- even if the fate of the sisters remains ominously ambiguous by the end.