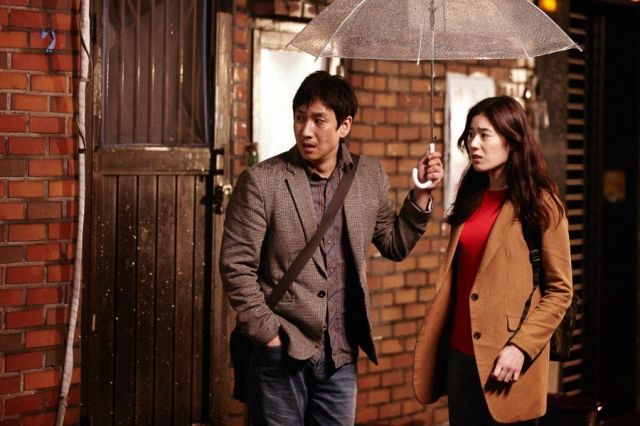 Hae-Won (played by Jung Eun-chae) craves intimacy. The weird part is that it's fairly clear, looking at her daily life, that opportunities for intimacy surround her. There are plenty of people in Hae-Won's life who want to talk with and spend time with her. The trouble is that whenever Hae-Won actually gets involved in one of these long walks of light discussion, the conversation is stifled by positivity.

For what it's worth, this isn't entirely Hae-Won's fault. Her conversation partners are just as guilty of this as she is. But it's rather unmistakable that Hae-Won is seeking out and choosing people to reenforce this prison of good feelings, however obvious it is that it's not making her happy. Even Hae-Won's dreams depict a rather pathetic space where in the limitless bounds of imagination, all that happens are these rather mundane events where she meets other people who talk to her in a mildly more engaging manner than her real-life friends do.

This is actually quite funny, in its own sad pathetic way. "Nobody's Daughter Haewon" is a study on the superior attitude of human nature, of people who so desperately want to feel genuine intimacy, they'll look for it in the dumbest places. Not the wrong places exactly. In classical artistic stories passionate tales of paramours looking for love outside the confines of marriage are quite common ones. What the educated characters in this film don't understand, or rather, choose not to understand is that just because a relationship has no meaningful future doesn't make it inherently romantic.

There's almost a sense of teen spirit in the cliched tones character try to express how deep they are to each other. At multiple points a character insists on playing a favorite song. It's a good song, but the sound quality is terrible and it's completely discordant with both the backdrop and the context of the scene. Characters try to force romantic beliefs into places where they don't belong, and the comedy resulting is the comedy inherent in watching a small child stubbornly try to smash a square block into a round hole on the board. When the child smiles, overjoyed at solving the puzzle? That same moment of adult laughter is mirrored in Hae-Won's "successes".

This film feature a special appearance by Yu Jun-sang. Most famous for his role in "My Husband Got a Family", his public persona is that of an overly cheerful, upbeat, positive-thinking, affectionate warm-hearted family man that's the perfect romantic partner. Yu Jun-sang's role in the film is relatively small, but even his appearance is enough to underscore that he is the goal. He is the person that the characters in this film want to be. And every last one of them are failing at it.

"Nobody's Daughter Haewon" uses the camera's objectivity to mock the pretentiousness of people who think they're too cool and above the rules to try and resolve their emotional problems the normal way. The result is characters who are just pathetic enough to laugh at and yet just arrogant enough that it's difficult to feel sorry for them, in part because they clearly want someone to give them that kind of pity. It's excellent self-critical stuff, the kind of movie a person could use to remind themselves that breaking up with an ex-lover was probably the smartest possible move.

This review was written by William Schwartz as a part of HanCinema's Chuseok Film Festival coverage.