[HanCinema's Film Review] "Not Out" 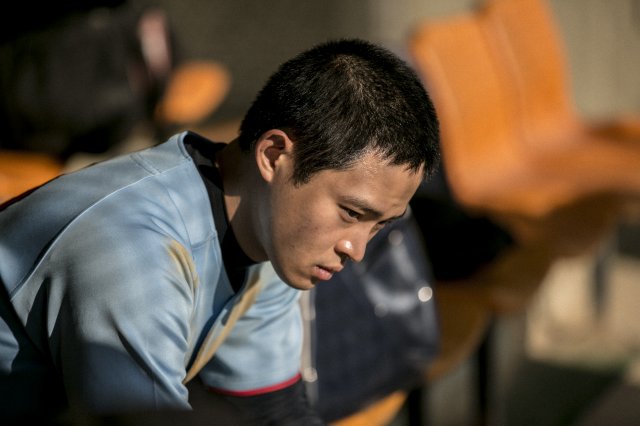 The opening scene of "Not Out" has the distinct look of an amateur sports broadcast. We see the big field, and we see the happy winning team. Yet writer/director Lee Jung-gon instead has the bulk of the runtime take place off the field after the victory, as we see young shot Gwang-ho (played by Jung Jae-gwang) make a risky decision on impulse and then struggle with the reality that he may not, in fact, play professional baseball as he always dreamed.

The dark foreboding tone of "Not Out" has a lot in common with "Baseball Girl" from last year. Both movies have a traditionally light-hearted and positive feel-good premise where deficiencies in going professional are typically depicted as due to a lack of effort. Yet the actual tonal focus in both films is on how dumb luck and petty interpersonal drama are considerably more important to success in this field than the canned fairy tales we're told as children would have us believe.

Gwang-ho is for his part also an embarrassingly dumb teenager, who alternates between saying almost nothing only to later on say just a little too much. Gwang-ho is such a terrible communicator it's genuinely hard to tell whether he's a sociopathic liar or too dimwitted to know how to properly express remorse. Gwang-ho is also done no favors by a culture of stoic masculinity that encourages him to keep his mouth shut except in the most crass possible situations.

This is the context in which Soo-hyeon (played by Song Yi-jae) comes into the story, although her character ended up being far less important than I was expecting. Soo-hyeon is the only character in the movie who both knows what she's doing, and is also competent at explaining what she's doing. Now, as it happens what Soo-hyeon is doing is participating in a bewildering scheme to sell moonshine gasoline. But she does at least realize the entire situation is insane and that everyone needs to be prepared to back out at a moment's notice if they have to.

That entire plot point, by the way, is quite instructive when it comes to showing just how naive Gwang-ho really is. The kid has some vague notion of how what he's doing is illegal, he's just not sure why, which makes it awfully difficult for him to figure out when he's making a genuinely terrible decision. This is often more true on the small scale though, as is shown in one moment where Gwang-ho's baseball buddy Heung-sik (played by Lee Kyu-sung) starts searching for plot points in the most needlessly dangerous places.

Yet there's no particularly gratuitous violence on display, with the few scenes of genuine emergency just coming off screen with a sort of numb shock. This is exactly how the bewildered Gwang-ho grasps his changing situation, with writer/director Lee Jung-gon almost perfectly allowing us to identify with the young man. Eventually the big question is less whether Gwang-ho will play baseball and more whether understand just what it means to sacrifice everything for the game.