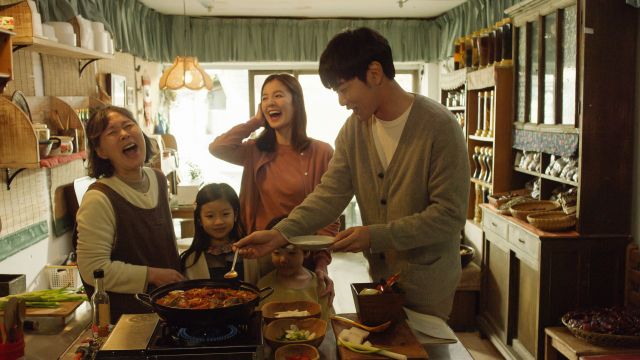 Ae-ran (played by Lee Joo-sil) is a grandmother who runs a small shop selling side dishes. Ae-ran is an obsessive perfectionist when it comes to how her livelihood is organized, to the point it seems unlikely that her apprentice Yoon-ja (played by Kim Sun-hwa) will ever be able to manage the shop herself. Of course, since Ae-ran owns the shop, possession if it would pass down to her adult son Gyu-hyeon (played by Lee Jong-hyuk). Well, also to her daughter Hye-won (played by Lee Young-ah), but Gyu-hyeon is the main perspective character here as Ae-ran's family comes to terms with her dementia.

The story is unavoidably sad. We start off with Ae-ran being this extremely proactive independent woman and slowly see her mental faculties start to waste away. Lee Joo-sil's performance as Ae-ran easily ranks among the most accurate dramatizations of dementia that I've ever seen. I was frequently reminded of my own grandmother, an intelligent woman who ran a business selling wildflower seeds well into old age only to become a confused shadow of her former self.

Ae-ran's life work has been cooking, and the titular notebook contains all of her special custom recipes. While we are made aware of the notebook's existence early on, it's quite some time before Gyu-hyeon realizes the object exists- by which point his children have already expressed severe disappointment in the inability of their parents to recreate grandma's delicious cooking.

The children whining over food is simply the most explicit visualization of how losing Ae-ran is affecting the lives of her family. Gyu-hyeon starts the movie off having career troubles, but these problems drift off into the peripherary as Gyu-hyeon starts to visualize a life without his mom, who he has been taking for granted. One of the darker portions of the story involves secret resentment Ae-ran has felt for her son, over a sad tragedy she never told him about.

"Notebook from My Mother" isn't quite as depressing as it sounds. Eventually Gyu-hyeon does reach some closure as to his mother's condition, and is even inspired to complete the notebook by taking advantage of his mother's occassional moments of lucidity. An alternative to traditional hospitals for dementia patients is also discussed in extended detail. My main issue with this section of the movie is that it's far too short. The lessons about traditional Korean cooking are just as elucidating as what we learn about dementia, and tie in well to Ae-ran's overall life trajectory.

But then dementia awareness is the main goal here. Observe all the dementia foundations listed in the credits, as well as the numerous crowdfunders who likely have a personal connection to the disease just as I do. There's a large video section too, filled with dedications from children and grandchildren telling their mothers and grandmothers how much they love them. Which I suppose is another good lesson. I love you is not a phrase that can be said too often when it comes to someone who will almost certainly before you will.

"Notebook from My Mother" is directed by Kim Seong-ho and features Lee Joo-sil, Lee Jong-hyuk, Kim Sung-eun and Kim Sun-hwa.

"[HanCinema's Film Review] "Notebook from My Mother""
by HanCinema is licensed under a Creative Commons Attribution-Share Alike 3.0 Unported License.