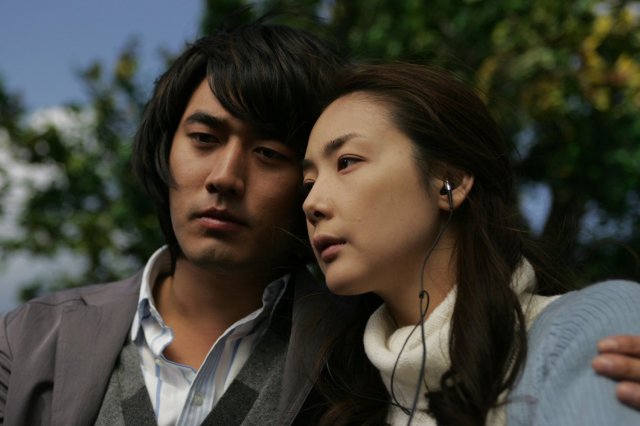 Min-soo (played by Jo Han-sun) is a real player with multiple girlfriends, even though he somewhat counterintuitively manages a video game company. I rather enjoyed the various computer game spots in "Now and Forever", marveling at times as to the kind of equipment that was apparently considered standard issue in the South Korean market at the time. But anyway, one rainy day Min-soo runs into Hye-won (played by Choi Ji-woo), who coyly rejects his advances on the way to the hospital.

The fact that Hye-won is going to the hospital should perhaps have served as a clue to Min-soo that she is not in the best of health. Instead, Min-soo just sort of dimwittedly pursues her without regard to long-term plans. That's Min-soo's main character arc, is coming to reject his old way of thinking when it comes to women for Hye-won's sake. It's actually a little more complicated than that but "Now and Forever" only has one really solid twist that I'd rather not spoil.

That twist, and the aforementioned video game stuff...are the main points of praise "Now and Forever" has going for it. This is less a bad movie as it is one that's aggressively going through the motions, with such simplistically and obviously telegraphed character archetypes it's hard to be surprised by much of anything that happens. We get half of a happy movie with aggressive romancing, then half of a sad movie with aggressive moping around.

Contrast Min-soo's dopey co-worker Kyeong-min (played by Choi Sung-guk) and Hye-won's film professional best friend Soo-jin (played by Seo Young-hee), who get their own subplot. It mainly consists of Kyeong-min dorkily failing to impress Soo-jin, while the latter smiles at him, charmed by yet pitying his pathetic cuteness. I was disappointed to find that Choi Sung-guk and Seo Young-hee have not had robust careers in the fourteen years since this movie came out. Both are surprisingly compelling.

Elsewhere "Now and Forever" feels like a relic. It's like the platonic ideal of a stereotypical South Korean romantic melodrama from that time period. Director Kim Seong-joong expects us to have so much familiarity with the basic plot outline that he abruptly makes scene transitions without explanation, simply expecting us to know what's supposed to happen next. In one memorable instance he even does this mid-scene, with our leading lady arbitrarily deciding that instead of going out for dinner she'd rather just break up with the leading man based on the slightest of provocations.

The one kind of interesting idea in "Now and Forever" is how it compares the relationship of the two leads to two trees that have grown in such a way as to be inseparable from each other. That's actually what the literal Korean title refers to. I can see why it wasn't translated properly, since inosculation doesn't have a very romantic ring to it. Not that this is a good metaphor, mind you, given how Min-soo and Hye-won met as adults, although "Now and Forever" isn't a good movie either in much the same way.