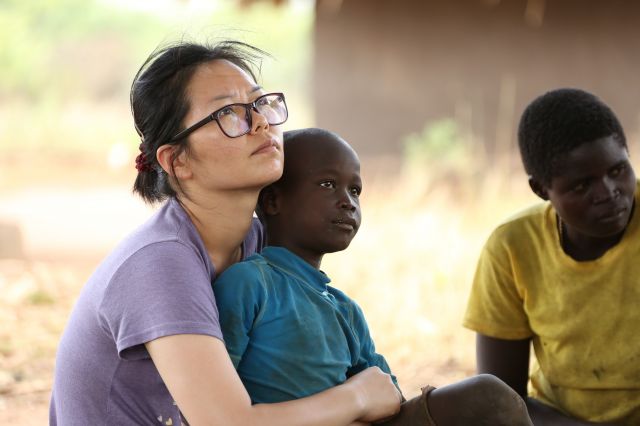 In Uganda and Syria, unstable political situations fomented by the likes of the Lord's Resistance Army and ISIS have created a more-or-less permanent underclass of refugees who have been driven from their homes and have little hope except for what they glean from charity. Politicians frequently prove less than adept at solving these problems, so the task often falls to missionaries to try and bring hope to these people.

"Obedience" is a documentary fronted by the Christian Broadcasting Service. Surprisingly it is not what I would consider to be an excessively religious movie. Directors Kim Dong-min and Lee Joo-hoon put most of their focus on the educational work the missionaries provide as a contrast to the terror these people escaped from. That the missionaries are motivated primarily by their belief in Gospel is unavoidable, although really, the important part is that they provide hope, not why they do it.

The method of instruction is also noteworthy in that the missionaries operate largely through use of effective rapport. Strange though the sight may seem initially, the teachers tend to instruct in the local dialect, and this creates a model of inspiration. You too, could speak foreign tongues and travel the world some day, just so long as you focus on getting a good education right now. The argument appears to be a reasonably persuasive one- although as is always the case in documentaries, information is frequently kept just out of view.

Then again, specific point is made of how in Uganda, the mission there has been ongoing. While the Lord's Resistance Army is generally irrelevant today, the memories of the awful things those people did continue to leave a scar on the pscyhe of even the most optimistic students once forced to observe that brutality. The missionaries themselves were not exempt from this- one man died during the height of these purges, and his grave now a mournful place of martyrdom.

That's the grim, if inevitable consequence of proper "Obedience" to the will of God, and it's why these Christian missionary groups are often able to inspire confidence in displaced people where secular instituions fail. Missionaries don't just pop over for a few months and head right back home. They build lives with their new congregations, offering badly needed hope even if means they have to raise their families in a war zone. Marriage, as portrayed in "Obedience", is a powerful covenant that can only survive when man and wife are fully untied in search of strong spiritual purpose.

That's the overall message "Obedience" is going for anyway. While all movies are advertisements in the end, "Obedience" is somewhat more explicit in that it clearly exhorts the viewer to donate to missionary organizations to help these communities thrive. If nothing else, though, it's a much better pitch than UNICEF's starving African children. When the missionaries see refugees, they don't see pathetic people who deserve our pity. They see lost souls who deserve the grace of God like everyone else. That's some pretty powerful optimism.