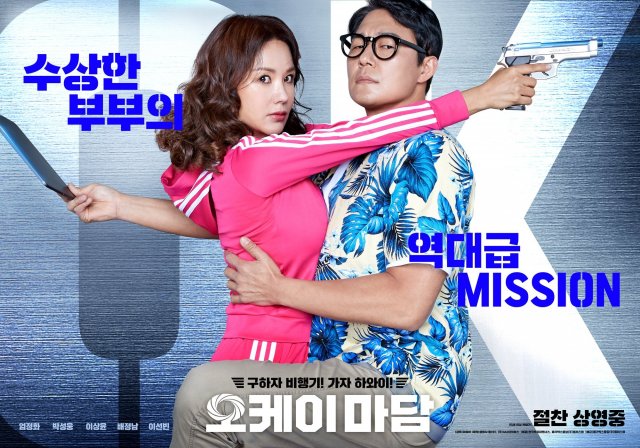 Mi-yeong (played by Uhm Jung-hwa) is a middle-aged housewife who sells traditional baked goods at the open-air market in Yeongcheon. Even though "OK! MADAM" opens up with a somewhat perplexing North Korean involved spy action scene, the movie is oddly coy about Mi-yeong's actual identity. So it is that as "OK! MADAM" moves on to having Mi-yeong and her family getting on a plane and becoming involved with a hijacking, the movie begins a sequence of generally meaningless plot twists.

Most of the characters here feel like they're sourced from completely different movies. At times even two aspects of the same character feel sourced from completely different movies, because there's just no consistency. One scene we're getting low-brow jokes about the family nearly being late for their own vacation since they took the bus rather than the taxi. Then in the next scene Mi-yeong shows shocking hypercompetency at catching some fallen snacks. Then we're stuck with an extended scene of aggressive toilet humor. Then there's some brutal terrorist action.

"OK! MADAM" could have made this work if the movie were played like a farce. A politician played by Kim Byung-ok briefly reminded me of a similar self-important character in the classic train action comedy "Break Out" yet his character has no real presence beyond a couple of fairly weak one-off jokes. Which I can say for most of the passengers really. They have distinct traits while lacking interaction or payoff. Director Lee Cheol-ha acts like their personalities alone are good for a laugh but they just aren't.

What really makes this frustrating is that the few times we do get interaction, the jokes are quite good. There's one great bit where Mi-yeong's daughter Na-ri (played by Jung Soo-bin) has to tell a ridiculous lie because the little girl's smart enough to realize she's a potential hostage. This scene works because the only way the generally preposterous situation could organically come up is by having a large number of radically different characters and motivations collide in such a way that the lie can be plausible counterintuitively by being absurd.

Such solid deliveries are unfortunately the exception rather than rule as most of "OK! MADAM" just misses the mark. A potentially funny Kim Nam-gil cameo, for example, is wasted because we only find out he's in the movie at the last minute. By withholding so much information, writer Shin Hyun-sung weakens his own punchlines while needlessly dragging out set-ups that never really go anywhere. "OK! MADAM" is tiring more than anything else, and a big disappointment.