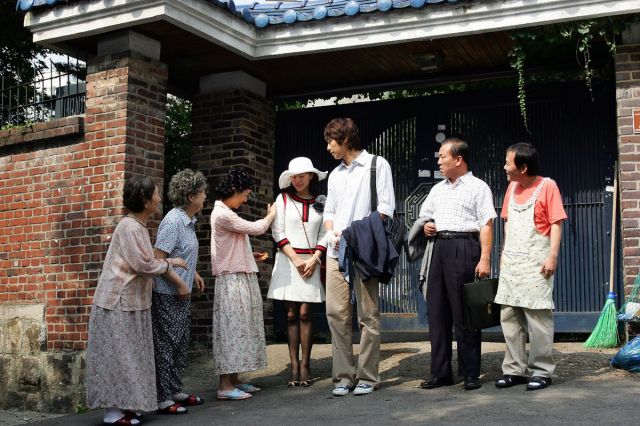 Neurotic Mi-ja (played by Ye Ji-won) is in her thirties and badly wanting a boyfriend. Hyeon-woo (played by Ji Hyun-woo) is younger, attractive, and available, mostly because he happens to be physically present at Mi-ja's new job. That's the faint outline of a plot around which "Old Miss Diary - Movie" surrounds itself. Really the whole project is mostly an excuse for the cast and crew of "Old Miss Diary - Drama" to do an abridged version of the situation comedy. Which is just as well. Who has time to watch two hundred and thirty two episodes of anything these days?

That's one hundred and sixteen hours, or almost five days of continuous television with no sleep were you to try and marathon it. And the weird thing is, I can easily see how "Old Miss Diary - Drama" could just keep going on and on. Hyeon-woo may be physically present as a character but really, this is just the Mi-ja show. Sensitive and flawed, Mi-ja struggles to avoid overreacting to minor setbacks. Her imagination is psychotic. We're just brief visitors to the wacky visions in Mi-ja's head.

In all fairness the local old people in Mi-ja's neighborhood are...less than helpful, constantly engaged in their own hare-brained schemes for love and profit when they're not egging on Mi-ja's own fantasies. The world of "Old Miss Diary - Movie" is filled with local color, where manic gesticulation and crazed overacting are the main selling point to any individual joke. Even mundane activites like waiting for non-existent appointments take on epic undertones when there's that much at stake.

That's the fundamental appeal. Mi-ja and her cohorts put up with the various mundanities of the modern world, and we empathize with their suffering as we too sufferfrom those indignities. Indeed, we only wish we could go crazy enough to get in the planning stages of an honest-to-goodness bank robbery, fantasizing about the predictable poor reactions other people will have to our bad ideas.

This is a large part of what makes Mi-ja's manifestations so vivid, is that they're not really all that far off from the real world. Yes, whle the crude computer graphics may be an obvious clue that Mi-ja has gone off to fantasyland, it's hard to blame her when Mi-ja's actual job involves pretending to be a character in a completely different kind of fantasyland. The ennui is crushing, and we laugh at Mi-ja's coping mechanisms since we, too, die on the inside in much the same way.

So, in summary, "Old Miss Diary - Movie" is either a fairly accurate adaptation of the manic South Korean sitcom style, or an innovative and quirky foreign comedy. It's all a matter of perspective, so best not to overthink the specifics. The main difference between film and television is that the latter spends less money over a longer period of time. The production team behind "Old Miss Diary - Movie" condensed that material into a series of tight jokes. Where nuance in plot was lost is more than made up for with energy here.