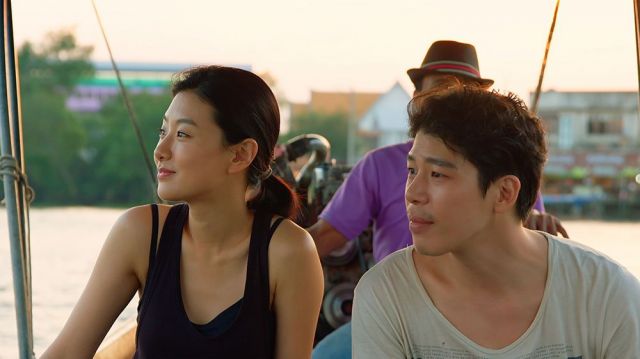 Ji-ha (played by Hong Wan-pyo) is an aspiring director who travels to Thailand in order to research a film project. His idea involves a story about a Korean husband and wife who travel to Thailand and get separated. We never actually get to hear the end of this story, because the first time Ji-ha starts to get into details, another character interrupts him, saying that Thailand expatriates know all about this story and they hate it.

That darkly funny moment is by far the best "On the Road, Khaosan Tango" has to offer. Because of course people who actually live in foreign countries don't like hearing stories about how foreign countries are inherently dangerous. From there I was expecting a nuanced film about the real Thailand where people live, rather than the abstract fantasy promoted in media. Unfortunately, writer/director Kim Beomsam never goes there.

Instead he just circles around other related tropes, most of them centered around Ha-yeong (played by Hyunri), a young woman Ji-ha meets and starts tagging along with. There's this odd conflict about Ha-yeong running away from her problems because she chooses to live in Thailand during wintertime. I found that rather odd. Plenty of people in the colder parts of the United States would gladly winter somewhere warmer if given the chance.

But beyond strange choice of story arcs Ji-ha and Ha-yeong's interpersonal dynamic is also fraught by a lack of chemistry between the main actors. At one point Ha-yeong strikes Ji-ha so hard that she leaves a visibly nasty mark. When Ha-yeong sees this mark in a later scene, she laughs at him. That whole sequence makes Ha-yeong, an allegedly sympathetic character, come off as rather mean-spirited.

Ji-ha suffers from a more substantative problem in that he's very boring. After getting called out on how dumb his movie idea is, Ji-ha just wanders around aimlessly for awhile before finally deciding to research it again. Then there's a big plot twist which just comes off as horribly forced because it centers around a very peripheral character who didn't actually have all that much screentime with either Ji-ha or Ha-yeong during the main story.

With no real characters to speak of, and a middling plot, all "On the Road, Khaosan Tango" has to redeem itself is the location shooting. Which I guess is...all right? The film takes places on Khaosan Road, which is a random street in Bangkok that is apparently a famous location for backpackers. Hence why Ji-ha went there to research his movie.

Bear in mind that "On the Road, Khaosan Tango" never actually explains this. I had to look it up, and most of the time Ji-ha and Ha-yeong are just going to other parts of Bangkok anyway. So there it is again- a potentially interesting idea left underdeveloped. Perhaps the aimless nature of the creative design in "On the Road, Khaosan Tango" is meant to be illustrative of the wanderlust which characterizes Ji-ha and Ha-yeong's personalities. Unfortunately that doesn't render the movie particularly interesting to watch.

"[HanCinema's Film Review] "On the Road, Khaosan Tango""
by HanCinema is licensed under a Creative Commons Attribution-Share Alike 3.0 Unported License.