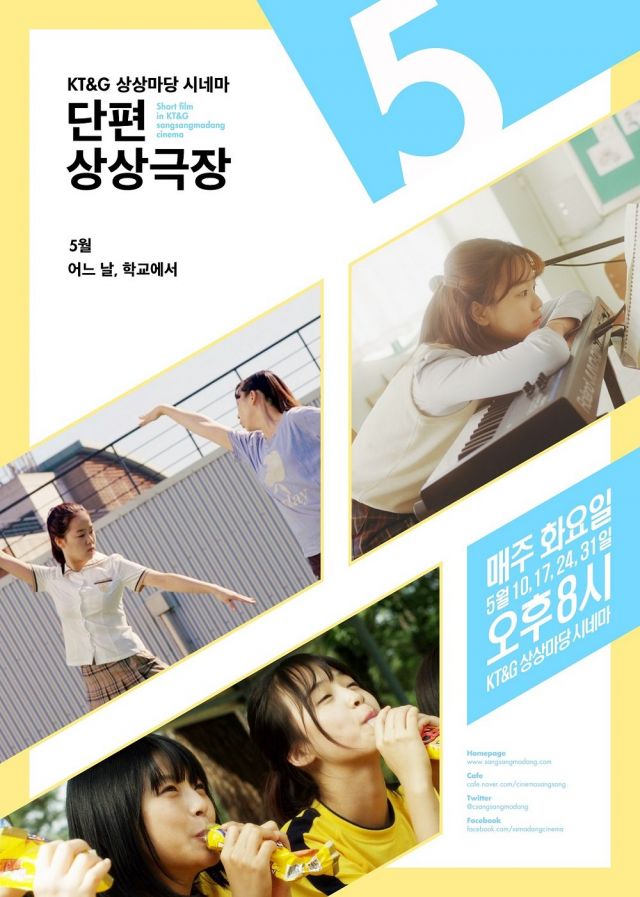 The KT&G Imagination Garden (KT&G 상상마당) in Hongdae runs a lot of cultural events- among these is a movie theater that shows independent films and, every so often, special short film collections. Tuesday nights in May, that theme is "One Day At School", which deals with stories of unintentional ostracism, realizable dreams, and frivolous attachments to bad ideas. All of these are centered, as might be expected, at school.

The first story, The End of Passion, directed by Kwak Eun-mi, deals with the dynamics behind preparation for a school sports festival. The conflict is fairly simple. Everyone (especially the teacher) wants to win at the sports festival, yet one girl demonstrates little competence in her chosen event. Melancholy and depression result as this mostly arbitrary decision becomes the centerpoint of an immensely awkward battle of wills between teacher and student.

The next story, Lucky Ball by director Kwak Min-seung deals with a couple of musically inclined girls who are suddenly disrupted during practice. High school crushes are the main discussion point here. While the least ambitious of the three films, Lucky Ball is oddly enough the most enjoyable because it tells the most transparent, unambiguous story. It also has good music, and even sort of ends on a happy note.

The last short, One Day by Yoo Ji-young, is the weirdest story of the group which puts a rather unexpected spin on the whole "teacher/student" romance trope. Basically, rather than coming off as being the result of predatory behavior, all we see is a dumb high school relationship that appears to have survived this long on inertia alone. The rationalization for the existence of the relationship begins and ends with "he's a teacher, which is a higher position than me, ergo he must be attractive".

What's interesting about all three of the shorts in "One Day At School" is that they show off life-affecting emotional shifts without really exaggerating the importance of these events through melodrama. The awkward stress suffered by the characters is mostly just awkward, exacerbated somewhat by the secretive nature of many character motivations. Yet publicizing these secret motivations would in fact be just as hurtful and stress-inducing.

Although the films selected for this omnibus were pre-existing works by three directors working independently from each other, they're surprisingly well-complemented in tone. It's telling how when in one of the films, a character actually manages to get killed, even that doesn't really demand tragic catharsis. Rather, what we get is character commentary on how each individual student reacts to the disaster.

That much is something always worth remembering when it comes to high school days. While students are in theory minds to be molded into next generation's leaders, in reality they all have preset personalities. Some can take abuse in stride. Others crack apart on social problems which seems, from an outside perspective, largely supercilious. And others can function just fine provided they get a good cry every once in awhile. Although really, depending on the day and the context, I think we are all one or the other at some point. In this way "One Day At School" is fairly useful self-reflection.

"One Day At School" is directed by Kwak Eun-mi, Kwak Min-seung and Yu Ji-yeon.

"[HanCinema's Film Review] "One Day At School""
by HanCinema is licensed under a Creative Commons Attribution-Share Alike 3.0 Unported License.