[HanCinema's Film Review] "One For All, All For One" 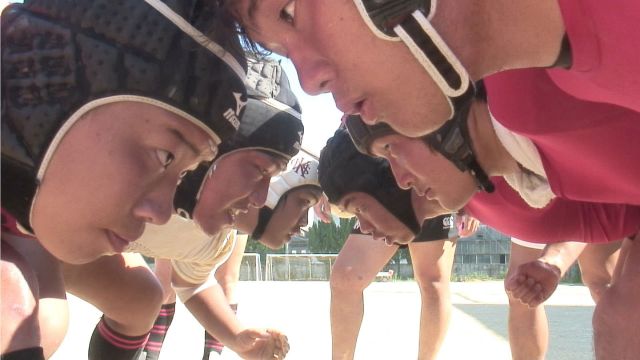 Well, it finally happened. Ever since we were kids everybody had cameras and camcorders at all the sports games, but it's only recently the quality of those machines has been good enough that they could actually pass for film. "One for All, All for One" is a sports documentary built almost entirely from this casual footage. The gimmick upon which this documentary rests to justify why we should care- the game is rugby, the players Korean, but the school is in Osaka. This is the story of ethnic Korean high school students living in Japan.

To be entirely honest, I'm not completely sure what the point of this documentary is supposed to be outside of sheer novelty value. I guess that for local audiences it might mainly just be novelty value. Ethnic Koreans in Japan typically descend from those who came to the country during the Occupation and for whatever reason didn't leave. Oftentimes this has to do with politics, given that the ancestors here came from both halves of the Korean peninsula, back before the partition.

Don't expect too much exposition on that front, though. For the most part this is just the story of an unusually skilled rugby team that even makes international field trips to play countries on the other side of the ocean. There's not even much in the way of conflict. The occasional cheesy teen drama does make an appearance, but these are only in the very limited context of what the camcorders happened to capture at the time.

Even the rugby games themselves tend to be in poor focus. The best footage by far comes from a Japanese sports station that aired some of the more high profile games on terresetrial television. For the sake of film, it's fortunate that rugby is a fairly easy game to understand with no complicated rules. There's not really any space for "One for All, All for One" to actually explain it.

The young people who make up this rugby team are very committed to each other and to the notion of their team. From a broad perspective that's the main metaphor of the documentary- they don't just love rugby, they also love their own personal odd ethnic identity, where they're pretty much Japanese and Korean at the same time. Rugby is a broader expression of that, which is why a documentary exists that defines their identities in this way that is clearly intended for the Korean audience that still lives in their homeland.

For any other audience it's hard to really recommend this documentary. For an American like myself, who's well familiar with high school sports culture and the camaraderie, there's not really much here that's all that new. Still, at the very least "One for All, All for One" is a very honest film, and accurately portrays life from the view of the players themselves rather than forcing a moral from the outside. That, at least, is a mild accomplishment for a documentary mostly pieced together from random footage.

"One for All, All for One" is directed by Park Donsa and Park Sayu and narrated by Moon Jung-hee.

"[HanCinema's Film Review] "One For All, All For One""
by HanCinema is licensed under a Creative Commons Attribution-Share Alike 3.0 Unported License.