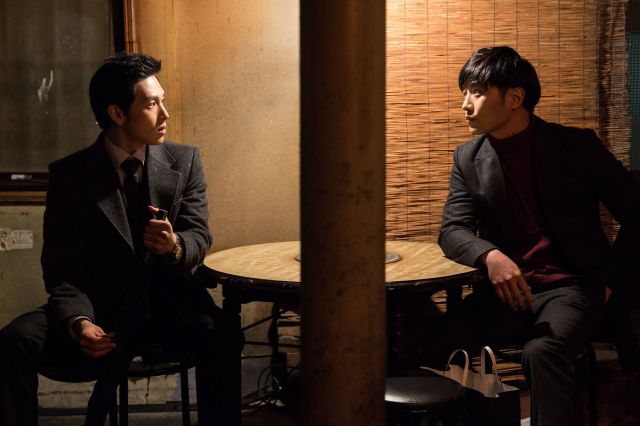 The year is 2005. That's...kind of recent in nostalgia terms. Yes, those were the days back when everyone had fliptop phones and computers monitors were still the size of TVs- these being the days before flatscreen TVs. Anyway, Min-jae (played by Im Si-wan) is a college student who teams up with big time swindler Seok-goo (played by Jin Goo) to fight corporate greed by helping low-income people qualify for loans by manipulating bank systems in such a way that people are granted loans when they don't actually have proper credit for them.

If that sounds familiar it's because this "scam" is how the global financial crisis got started. Min-jae and Seok-goo are just small time versions of the big players. You have public-minded institutuions who thought it was good for poor people to have short-term access to big money since presumably that would help them not be poor anymore in the future somehow. Then, there were financial firms who liked using fuzzy math to quantify bad loans as long-term profits.

Min-jae principally justifies himself via morality while Seok-goo's rationalizations involve money. There is naturally some interchange between these philosophies, as there also is between the various other members of their growing team of experts. Bear in mind that actual ethical discussions are at a minimum in "One Line", as most of the screentime is dedicated to explaining the logistics of how Min-jae and Seok-goo's complicated scam works.

"One Line" is the kind of movie that makes me feel guilty to be a film critic. Usually I complain when movies are very bad with their explanations, to the point it's hard to tell how or why anything happened. Yet with "One Line", the problem is instead that the explanations are so in-depth, and so well pinpointed, that director Yang Kyeong-mo-I almost completely forgets that he is making a heist movie, which really needs strong personalities and action sequences to function properly.

Consider how of all the characters, the ones I understand best are not either of the leads, but rather Chief Song (played by Lee Dong-hwi) and Detective Joo-hwan (played by Ahn Se-ha). Why? Because Chief Song is an idiot who happens to be good with computers and defuses tough situations by accident. Detective Joo-hwan, by contrast, can't even start fights on purpose because in the luckless field of financial investigator, no one takes you seriously. Not even other police officers.

All of the characters work along the same lines- the tension is on who is going to side with who by the end and what specific manner of complicated planning is going to allow good to prevail in the end. Of course technically the good guys were criminals too, just nicer ones, and under American law they might not have even been criminals at all because...because...the technical implications of "One Line" kind of give me a headache. While I don't really feel comfortable describing "One Line" as a bad movie, it is nonetheless a curious genre mix more interesting on a technical level than the visceral one.