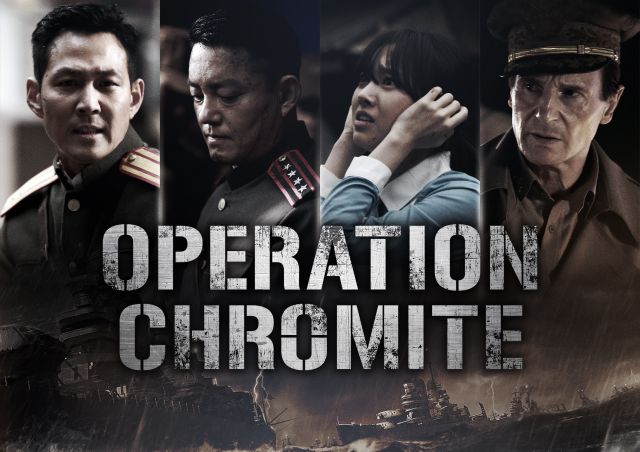 Hak-soo (played by Lee Jung-jae) is a noble South Korean soldier who leads a deep spy unit into Incheon island to uncover vital intelligence regarding whatever defenses, natural or manmade, may make an amphibious attack on the island practical or impractical. Gye-jin (played by Lee Beom-soo) is the at-times comically evil North Korean commander who opposes Hak-soo's efforts. That's the basic outline for "Operation Chromite". The movie is a tale of good versus evil- no context necessary.

My main dislike for "Operation Chromite" stems from an appreciation of history. The Korean War is among the more morally ambiguous conflicts in human history, and the simplistic portrayal of noble heroic South Koreans defending their country from the big mean bullying North Koreans is so ridiculous as to be outright propaganda. As "The Long Way Home" so effectively demonstrated last year, South and North Korea were at the time of the war such incredibly abstract concepts the typical soldier in either army would not have been able to coherently describe why exactly their side was right and the other one was wrong.

"Operation Chromite" doesn't make any real effort in this department either. The North Koreans are jerks, but it's never terribly clear how exactly they're planning to destroy Korea writ large. Hak-soo's motivation, to save his mother, makes especially little sense considering we see his mother working at a restaurant and generally looking none the worse for wear. That's not the kind of lifestyle that suffers a lot of direct interference from the ruling government.

It is the kind of lifestyle that can be easily destroyed by war, and "Operation Chromite" largely sidesteps the point of how bigger wars tend to cause bigger destruction. General MacArthur (played by Liam Neeson) is portrayed as heroic for his belief that North Korea needs to be wiped off the map. In a more self-aware movie this would be ironic, since the evil North Koreans believe the exact same thing about South Korea. But again, there's no relevant context like how all of MacArthur's post-"Operation Chromite" strategies tended to be tragic failures that resulted in disproportionate senseless loss of human life.

An even greater irony is how Hak-soo's team is consistently treated as unambiguously heroic when they're the ones who commit most of the on-screen war crimes. Impersonating another army's soldiers? Yeah, that's a war crime. It's not an obscure one either- the main bad thing North Koreans did during the Korean War was impersonate refugees to advance behind the enemy's front line.

But beyond the political issues it's a big aesthetic problem to have both the good guys and the bad guys wearing the exact same uniforms. Kind of makes it hard to tell them apart once the explosions start, especially since Hak-soo's confederates have so little individual personality as to be totally interchangeable. They're just as faceless as the poor North Korean conscripts who get mowed down by the truckload. As purely uncritical rah rah patriotism "Operation Chromite" may have some value, but by any other standard this is a fantastically useless and pointless film.