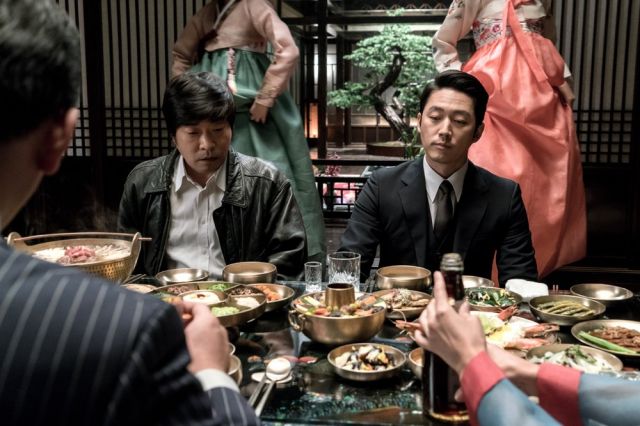 The time is 1987. Seong-jin (played by Son Hyun-joo) is an ordinary police officer who gets tapped by Gyoo-nam (played by Jang Hyuk), a high-ranking member of South Korea's police state hierarchy, to investigate a serial murder case. Well, "investigate" is kind of a strong word. Gyoo-nam already knows who he wants to blame for the killings, and Seong-jin is involved mainly to avoid raising suspicion that the whole thing is a frame-up job intended for political purposes.

Don't expect any actual mystery elements from "Ordinary Person". Director Kim Bong-han makes it pretty clear if only from the title that the main question here is not what happened, but rather why the characters make the choices that they do. Seong-jin's best friend, reporter Jae-jin (played by Kim Sang-ho) best exemplifies this moral conflict by expounding that in a just society, an "Ordinary Person" needs to have the right to conform to their own set of appropriate ethical standards.

As a cop in the eighties, Seong-jin's own ethical standards are a tad violent. And since the mooks Seong-jin runs into have it coming anyway, Seong-jin doesn't necessarily think the idea of a police state is all that bad. Seong-jin's friendship with Jae-jin, a good man who disagrees with him on politics, exemplifies the best of democratic society. Whatever our personal beliefs, it's important that we be able to share a drink together at the end of the day.

Gyoo-nam defies this natural order by becoming increasingly relentless in his demand that Seong-jin not pay attention to inconvenient evidence and just railroad the guy who the government doesn't like. Seong-jin is initially effectively tempted with access to fancy Japanese dinners and the important people who go to such dinners. But Seong-jin's camaraderie with Gyoo-nam can never approach what he has with Jae-jin because at the end of the day, Seong-jin isn't allowed to disagree with Gyoo-nam. The latter man's word is law.

The interpersonal dynamic between the three male leads is the main factor "Ordinary Person" has going for it. The political overtones lack the urgency of other recent eighties era films mainly because the script has a very tangential relation to actual history. With so many real-life horror stories it does, at times, seem odd that "Ordinary Person" takes a rather predictable plot and expects the story to be livened up solely by the power of its leads to convey moral ambiguity through their acting.

While that decision is odd, I do have to note that the creative choices are nonetheless quite effective. The extent to which Seong-jin, Gyoo-nam, and Jae-jin feel like they have to justify themselves, and the degree to which their arguments are convincing, are the main draw to "Ordinary Person". If nothing else I have to praise the movie for making a point of emphasizing why civility is so important in troubled modern times. It might not bother Seong-jin that much to learn that a bad dude is being tortured- realizing that it's a slippery slope to good dudes being tortured too, though, is a path he can only learn to cross with a serious dose of empathy.