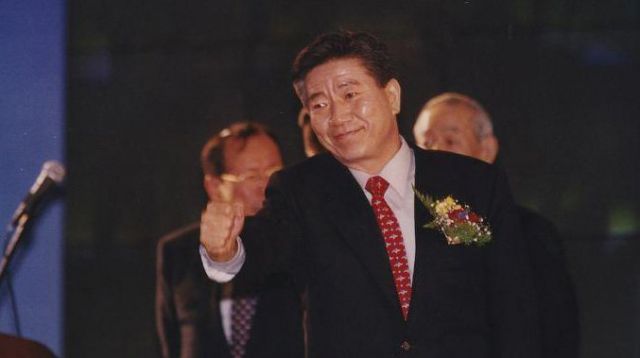 You might know Roh Moo-hyun as the pre Park Geun-hye president that got impeached. Or as the guy who gave North Korea nuclear weapons. Or as the leftist human rights lawyer whose incompetency prompted two conservative administrations. Or as the ex-president who killed himself over bribery allegations. But South Koreans, and particularly the South Korean left, venerate him as a hero. Although "Our President" contains almost no detail about Roh Moo-hyun's actual presidency, having watched this documentary, now I know why.

He was on our side. My use of "our" here is obviously flawed, since I am not a Korean citizen, but this is the sentiment that constantly resonates through Roh Moo-hyun's many speeches. In an era only fifteen years removed from dictatorship, when even a guy like Kim Dae-jung gave an impression of being fine with a little bit of benevolent corruption, there Roo Moo-hyun was talking about how the President of South Korea should serve the people of South Korea. All of them.

His speeches are incredible, thanks to Roh Moo-hyun's clear and obvious passion for his ideals. Nobody knew who Roh Moo-hyun was when he started running for President. He had only ever held minor office and started out in the single digits for his party's nomination. Yet the more people listened to him, the more inspired they became. Roh Moo-hyun's popularity continued to grow under the simple premise of- we all matter.

No one had ever seen anything like this before. And as we get interview after interview of Roh Moo-hyun's associates explaining just what it was like on the campaign trail with him, juxtaposed with the footage of the man's actual speeches...it's a little overwhelming. When we see the funeral procession at the end, the huge crowds with the pouring rain, it's easy to fill in the blanks. Powerful people dragged Roh Moo-hyun through the mud, because he was on our side. Not theirs.

Those "facts" I mentioned back in the first paragraph? That was propaganda meant to defame him. And for awhile it worked. Then Lee Myung-bak and Park Geun-hye came around, and a left wing that had been demoralized by the apparent disgrace of Roh Moo-hyun's failures started to realize. This is what happens when we elect brand name leaders who promise to be "smart". But Roh Moo-hyun? He was with us. He told us to never stop demanding the best of our politicians. And we won't.

I'm reminded of a recent news story. The current South Korean President Moon Jae-in was at a commemoration event for the birth of South Korea's democracy. He hugs a woman whose father died fighting the dictatorial government, and sings enthusiastically with the crowd. This was juxstaposed with Park Geun-hye's actions at the same event a few years back, where she and her whole entourage looked disinterested, bored, and irritated at the very idea of celebrating democracy.

Incidentally, Moon Jae-in was one of Roh Moo-hyun's legal associates back in their early career. He gives a heartbreaking eulogy near the end of "Our President" straight to the camera. Well well well. What goes around, comes around.

"Our President" is directed by Lee Chang-jae