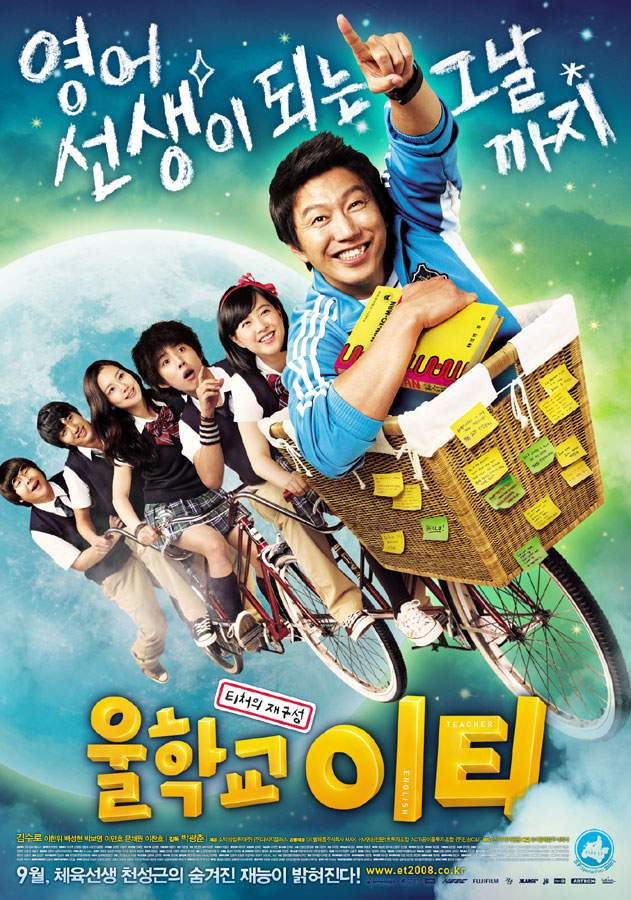 Seong-gun (played by Kim Soo-ro) is an eccentric high school gym teacher who doesn't really teach his students anything academically useful. Whenever he is confronted with students engaging in unsavory behavior, be it through fighting, indolence, or poorly considered after-school activities, Seong-gun reacts in the manner which involves the most possible violent physical exertion by all parties involved. A simple lecture amounting to "study more" seems quite beyond him.

"Our School E.T" is a strangely unromantic look at this unusual teacher. To be clear, Seong-gun is very much a good guy- while he doesn't help his students improve their test scores, he's filled with useful life lessons and makes a very positive impact on the lives of the students whon choose to accept his help. However, he still doesn't do anything to improve students' test scores- and this, to his school's administration, is unforgivable.

As a result, there are surprising satirical elements to most of the proceedings as Seong-gun struggles to preserve his place at the school. Primarily, "Our School E.T" is a gag comedy. But the very deliberate aim of the humor is difficult to ignore- while the gagman is the one holding the overall plot together, nearly every other character is dealing with bigger problems than Seong-gun. Even though there's much less focus on their subplots, they're all treated with the gravity appropriate to their situations. Seong-gun may have problems, but as an adult his life is set. But the decisions the teenage students make are of tremendous importance, as they meet the moments that will decide the rest of their lives.

This doesn't always work- the somewhat farcical nature of Seong-gun's character sometimes contrasts strangely with the gravity of his students' problems. When so much of the movie's comedic repertoire is based on physical humor, it can be difficult to reconcile that with serious physical danger. In that sense, "Our School E.T" is a reminder of why slapstick is not often used in coordination with serious plots.

However, when taken on its comedic merit, the jokes in "Our School E.T" work quite well. There's a self-deprecating, often even pathetic aura surrounding Seong-gun that really helps define him as a character. Seong-gun succeeds in his goals, not because of any special competency so much that he tries really hard. Given the setbacks he faces, this is understandable. Without a great sense of humor, it's hard to see how Seong-gun could get through the day.

For all of this, though, "Our School E.T" is not a very inspiring film. It identifies so many greater cultural problems that it becomes quite clear even a goofy teacher and his band of misfit students can't possibly solve them all. It's surprisingly serious by comedy standards- which hurts the tone somewhat, since sometimes the whiplash from slapstick comedy to fully serious real world problems is quite severe. Still, these problems can be overcome. To the filmgoer who can look past them, "Our School E.T" is an interesting blend of broad comedy set in a world with problems surprisingly close to our own.