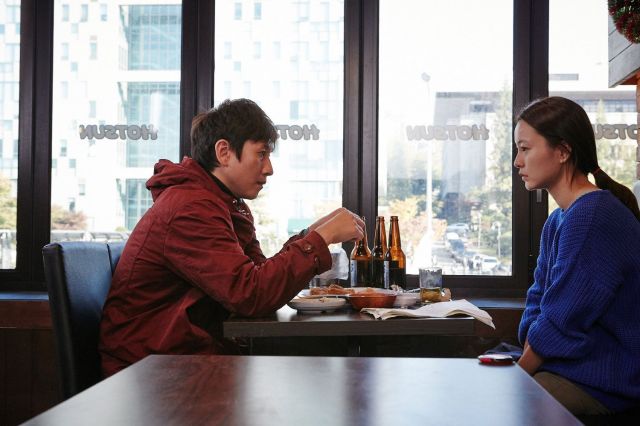 People like being listened to. That's your standard advice for how to win friends and influence people. But the converse of that point is also true. For a person to find that their opinion is not being considered, is not being taken seriously- well, that's a pretty terrifying fear right there. The various men in "Our Sunhi" live in panic of the idea that all the experience they've had, all the wisdom they've gained of the world, that all of this might be for naught since no one will ever actually listen to what they have to say.

Their prayers are answered in the form of Sunhi (played by Jung Yu-mi). Sunhi is a typical young woman with dreams of becoming a filmmaker, justifying the events of her past, and proving that she, too, is worthy of attention. Sunhi wants something from all the men she meets. Sometimes this is a distinct easily defined desire- other times she doesn't actually really know. So Sunhi bumbles about with these three men, searching for her dreams.

If you've ever seen a Hong Sang-soo movie, you know the score by now- the things our characters want are basically dumb things they should not want. The dialogue, as usual, follows an always flowing stream of rationalizing this basic foolishness. Where "Our Sunhi" differs from the rest of Hong Sang-soo's repertoire is that in this case, the characters don't actually know each other all that well. There's little sense of assumed intimacy. Even the meeting between Sunhi and her ex-boyfriend comes off less as a reflection and more like characters just demanding they listen to each other on general principle.

In many cases these people straight up refuse to believe each other, openly questioning whether or not they've just been told lies. Which sounds especially comical when a moment later after some profuse protestations of "of course I'm not lying!" everybody just comes around and accepts the situation again. It's like an over elaborate social pageant designed to increase the self-esteem of all the people involved, with little regard being made to whether anyone actually means what they say- the important part is just making them say it.

Hong Sang-soo released another movie in 2013- "Nobody's Daughter Haewon", and the contrast is an interesting one. I often felt watching "Our Sunhi" that this was the kind of situation that led to Haewon's dilemma. Granted, Sunhi has a few more variables- she's leaving the country soon and there are several possible paramours for her to choose from. But in any case it feels inevitable that her fate as a character in a Hong Sang-soo movie has been sealed, and that whatever happens in the United States, she will continue to make the same mistakes.

I can never quite grasp how Hong Sang-soo's films can be so funny when the undercurrent is so dark. The scenery helps a bit in that. While "Our Sunhi" is filmed mostly with long static camera shots, there's always stuff going around in the background, just simple visuals that are fun to look at. The entire final stretch takes place at Changgyeonggung Palace, and this scene begs a lot of questions. Like, why are these characters so obsessed with justifying themselves to each other when there's all this cool stuff in the background? Just go the palace, folks. That stuff's cooler than any conversation you're likely to get.