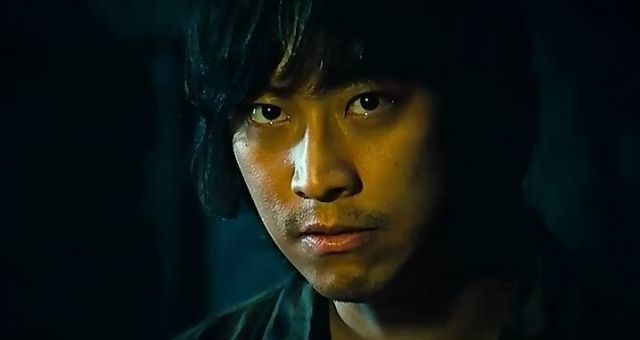 The way suspense thrillers involving serial killers usually go is that they build suspense over apprehending the killer or then finding them out. Sometimes the killer is revealed to the viewer early on, sometimes not, but their apprehension by the good guy or guys is the focus. "Our Town" takes a slightly different approach, where the murders are not as much a mystery as the people behind them and what issues they are hiding.

The film takes place in a town where a serial killer is murdering female victims and displaying them in public spaces and suspended from structures by ropes. Kyeong-joo (Oh Man-seok) is a failed writer whose only lifelong and current friend is Jae-sin (Lee Sun-kyun), the detective in charge of the killings. After a heated argument with his landlady over rent, Kyeong-joo murders her and attempts to hide her body as a victim of the killer. He then offers to help Jae-sin with solving the murders, hoping to keep his crime hidden. What makes this film a great piece that stands out is that, at its core, it is a drama. There is of course the thriller element and the film is very thematically dark and twisted, but rather than being so for style or for the thrills alone, it just functions as a means of making the film's point. Showing how human pain and the lies and guilt we keep, but also the evil we do affect others and ripple across lives, sullying them in the process.

Aside from its interesting story, the real treat in "Our Town" is the fact that it takes its time in revealing its plot and exploring its characters, who are wonderfully acted by a powerful trio with great chemistry. The cast in this film and their portrayals really elevate it. Without them and with lesser actors, this would not have been the gripping movie that it is. Along with Oh and Lee's great leading work, Ryu Deok-hwan's performance as the movie's serial killer has a wonderful duality about it. The difference between his facade and true self, as well as how human and still twisted he feels when his past is revealed are very well portrayed.

Since the movie reveals more about what is happening, why it is happening and more about its characters as time goes by, some things might feel very confusing or simply too unbelievable or contrived for a fair amount of time. This work is not about immediate exposition and easy answers to the mystery or its characters' issues. While not a flaw, as it was clearly intentional, this confusing way of development and the film's slow pace can bore those looking for a more action oriented experience. So those looking for quick thrills and a good chase movie will probably be disappointed by this. The chase is not the main appeal and it is therefore not focused on. This is more of a piece about character relationships and the mystery related to those. That said, there is a crime solving part here as well and it just adds to everything by injecting some race-against-time urgency into it.

"Our Town" could have easily been a very boring movie, were it not for the full picture eventually formed being an engaging one and putting every piece of the puzzle in its place. It would also have not succeeded with its goals if its cast were not talented and charismatic, their performances being what the movie relies on for characterization to a very big degree. These make it a solid, atmospheric, well presented and entertaining thriller worth watching.