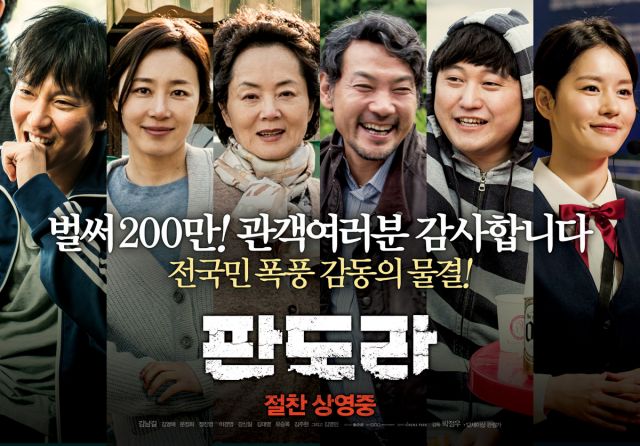 Jae-hyeok (played by Kim Nam-gil) works at a nuclear plant in southeast part of Korea and is constantly badgering his family about moving away for the sake of better opportunities. A lot of people have been leaving southeast Korea over the last few years for exactly this reason, so weighing ambition and opportunity against tradition and home is a relevant social conflict. Alas, "Pandora" chooses a very different villain- the sinister specter of nuclear power.

I didn't especially want to review "Pandora" on political terms. It's a fairly generic disaster movie after all. But by the time I got to the epilogue, which clumsily exposits on how South Korea has too many nuclear plants and how they must be destroyed lest they kill us all, I really didn't have a choice. The movie's politics are ridiculous. Coal plants cause much more death and destruction in a single day than nuclear power plants have in their entire history of use.

So when "Pandora" gets into preposterous setpieces where masses of people are fleeing acid rain clouds...this is just stupid fearmongering. Acid rain is an actual, real problem that does not have anything to do with nuclear power but does have everything to do with the energy generation sources that nuclear power replaces. Any realistic negative consequence of nuclear power spotlighted in "Pandora"  is so badly blown out of proportion and sped up as to functionally be a cartoon.

"Pandora" is on somewhat more solid footing when it suggests that politicians and corporations are short-sighted profit driven idiots who will disregard safety regulations and put people's lives at risk for no good reason. But even then nuclear power is a lousy bogeyman because nuclear power plants are designed with a large number of automatic failsafes which aren't mandatory for other more actually dangerous means of power generation. Even the fallout from the Fukushima Nuclear Disaster was incredibly mild, given that by sheer bad luck the plant was hit by an earthquake a tsunami and a shutdown all at the same time.

The more dramatic moments of "Pandora" are nowhere near enough to make up for its inherently sensationalist propagandistic nature. The pacing is incredibly slow. Not to worry- the special effects budget is put to good use, via extended scenes of us watching a bunch of people in a first aid tent slowly die of radiation poisoning. But outside the tent we just have a few blasé escape scenes on the same endless highway while other people just stand around being angry and coming up with increasingly complicated ways to do nothing.

Even the movie's big emotional climax does this, as we're left with an endless weepy spectacle that gets in the way of the action, and consequently the solving of the problem. Which I think is part of why the whole "nuclear power is evil" theme got under my skin. The characters in this movie are so incompetent they'd screw up basically any complicated task. Acting like nuclear power poses some sort of unique danger in this context is just plain intellectually dishonest.